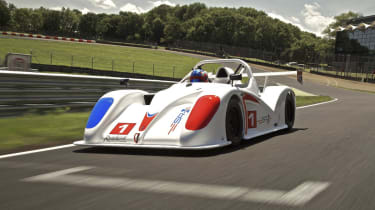 5
Radical’s new entry-level SR1 has spawned its own race series. The SR1 Cup is designed to bring new blood into British motorsport, offering a competitively priced package to complete beginners or novices with less than six races to their name.
The £37,500 package covers the cost of Radical’s new 185bhp SR1 sports car (full details here) plus a race licence, Alpinestars race suit, classroom seminars, two instructed trackdays and a competitive ‘How Fast’ event at the Bedford Autodrome, as well as the eight rounds of the SR1 Cup. The Cup will be held across the UK’s home circuits, previewed via the two trackdays, which will take place at Snetterton and Brands Hatch.

Subscribe today to have every issue of evo delivered straight to you. You'll SAVE 39% on the shop price, and get evo for its original cover price for a whole year!
Subscribe now
2013’s eight rounds will be held alongside those of the more senior Radical Clubman’s Cup, ensuring support, advice and spares will be readily available to SR1 Cup competitors. The Cup concludes in September, with its victor winning a works drive in the 2014 Clubman’s Cup opening round.
If you’re interested in taking part, there’s an application form on Radical’s website.
Follow us on TwitterFollow us on FacebookEmail us