Lexus has released details of the sporty F Sport version of its updated LS model, to be introduced with the model's facelift. 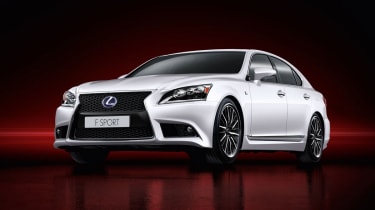 Lexus has given its flagship LS model a substantial set of revisions, which will see the introduction of the LS F Sport – a harder-edged performance orientated saloon.

Adding the company’s new ‘Spindle’ front-end to the car, which was first seen on the CT200 in 2011 and will feature on all models in the future, is the biggest external difference. New front and rear lights have also been introduced, with the option of LED lights now available. Engine choice will remain the same, with the petrol LS 460 and petrol-hybrid LS 600h.

The F Sport is based on the LS 460, which is powered by a 380bhp 4.6-litre V8 engine. There's no mention of a power increase, but improvements over the standard model will include sharper steering and suspension, thanks to a 10mm ride height drop and re-tuned suspension settings.

A Torsen limited slip differential has been added to help the rear-wheel drive Lexus to put its power down, and a set of uprated Brembo six-pot brake callipers up front should help to stop the two-tonne saloon. Lexus has also confirmed that it will be using a paddle shift gearbox system, which will blip the throttle on downshifts.

The auto-blipping feature will work in conjunction with a new ‘Intake Sound Generator’, which amplifies the car’s induction noise and pumps it into the cabin.