More details and a new colour for the Lexus LF-LC concept at the Australian motor show. 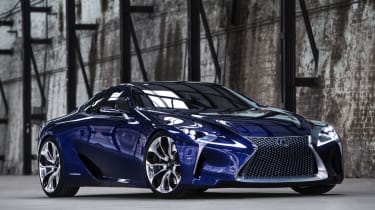 Lexus has unveiled a new version of the LF-LC concept car at the Australian motor show. The revised concept has changed colour, and we now have some more details on the hybrid drivetrain.

The concept originally made its debut at the Detroit motor show at the beginning of the year, and the sub-LFA sports car model was tipped to influence a possible SL rival, replacing the old SC430.

Lexus has now confirmed that the LF-LC concept is a hybrid model, and is powered by an efficient Atkinson cycle petrol engine, and advanced high-energy battery pack with an electric motor – producing a combined 500bhp.

Developed from the LFA, the LF-LC incorporates a mixture of carbon fibre and aluminium construction, as well as much lighter batteries for a overall lighter weight, although Lexus hasn’t confirmed the exact weight.

Inside it’s pure concept car, but Lexus has its eye firmly on the future – with much of the tech expected to make it into the next generation of Lexus road cars. This includes a remote touch-screen device that allows the driver to operate controls without distraction, as well as twin LCD screens mounted in the centre console for navigation and other multimedia functions.