Citroen has shown pictures of the new Chinese-market DS 6WR SUV model ahead of the Beijing motor show. Details here 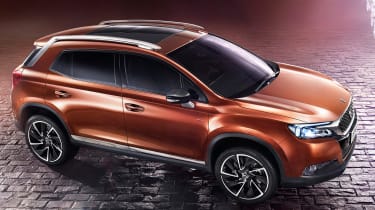 Citroen has shown pictures and released details of the new production-ready DS 6SW SUV at the Beijing motor show. The new model, which will be built in China, is the first SUV to be launched under the Citroen DS name.

An evolution of the Wild Rubis concept that was unveiled at last year’s Shanghai motor show, the DS 6WR looks largely similar, and is roughly the same size. That means full-size, with dimensions similar to a Porsche Cayenne.

Citroen has confirmed two power outputs for the SUV. Both models will use the company’s 1.6-litre turbo engine, with 160bhp and 200bhp states of tune available. As this is a Chinese-market model, there's no demand for a diesel version. Citroen has also confirmed that the model will be offered only with a six-speed automatic transmission. Although there is actually no four-wheel drive option, Citroen will use a new Grip Control system on the front wheels.

The DS model line has shown significant growth in China, and is now seen by PSA as a standalone model range. The new SUV is a big part of the future model expansion plan, and is expected to go on sale in 2015, with a move to other markets, including Europe, a distinct possibility.