The Citroen DS range expands with an SUV, previewed at the Shanghai motor show with the Wild Rubis concept 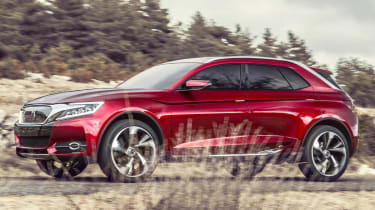 The latest Citroen DS model will be previewed at the 2013 Shanghai motor show. The DS Wild Rubis backs up previous hints of a DS-badged SUV, and it’s a full size one. At 4.7m long and 1.95m wide, it’s similar in length and width (though at 0.1m lower, different in height) to the Porsche Cayenne.

The Shanghai debut is a clear sign the Wild Rubis – rumoured to be called the DSX when it makes production – is aimed at the large-car loving Eastern markets. As such, it may not make it to UK showrooms.

Based on the Citroen DS5’s platform, the DS SUV will be four-wheel drive and is set to use a petrol-electric plug-in hybrid drivetrain, Citroen’s first following the diesel-hybrid DS5 sold in Europe.

The concept shares a number of styling cues – the bold front grille and intricately designed rear lights, in particular – with the Citroen Numero 9 concept. Said to preview a large DS9 saloon, also aimed at the Chinese market, it appears to have been leapfrogged to production by its SUV sibling.

The Citroen DS Wild Rubis will be unveiled at the Shanghai motor show, which opens on April 21, when we can expect firmer technical details.