Citroen will unveil a new DS saloon, DS SUV and DS luxury car, with one concept at the 2013 Shanghai motor show 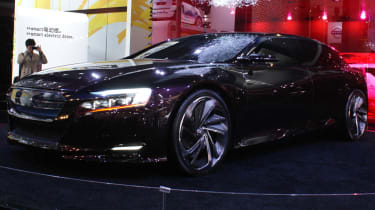 The Citroen DS range is set to double in size. Three models will join the DS3, DS4 and DS5 over the next year, all of them aimed primarily at the Chinese market. And at least one will be unveiled in concept form at April’s 2013 Shanghai motor show.

The first to make production is a C-segment saloon, based on the C4 that’s sold in Europe. China prefers its cars as saloons, while the UK’s opposing viewpoint ensures it’s a car we’re unlikely to see on sale. Some European markets already get the C-Elysee (pictured right), which gives an idea of what shape it could take.

Next up will be an SUV - the car we expect to see previewed in April - another area of the car market especially prosperous in the Far East. Citroen product chief Joel Maynadier confirmed it will be larger than the company’s current SUV offering, the C4 Aircross (twinned with the Peugeot 4008, and a car not sold in the UK – pictured right), and its premium image looks set to make it a Range Rover Evoque rival. It could be called the DSX.

Finally, a large saloon – rumoured to be called the DS9 – will be aimed at China’s luxury sector, and will fill the gap made by the recently departed Citroen C6. Expect it to resemble the Numero 9 concept car, shown at the 2012 Beijing and Paris motor shows (main image).

Citroen’s DS brand has sold well since its 2010 conception, with 300,000 cars built. The bulk of these – around 200,000 – are DS3s, with the remaining 100,000 split 65/35 between the DS4 and DS5. Nearly a third of Citroens sold in the UK wear DS badges – the DS3 outselling the C1 as the company’s biggest British seller – while the sub-brand’s more premium feel has gone down well in China, which is now Citroen’s biggest market after France.