With an almighty 627lb ft, the new Cayenne S Diesel is the torquiest Porsche you can buy. Review here 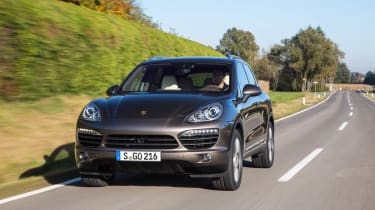 What is it? The new Porsche Cayenne S Diesel. With a colossal 627lb ft, it’s Porsche’s torquiest car. Prices start at £58,243. Technical highlights? If you’ve a soft spot for the old VW Touareg V10 TDI you’ll find its spiritual successor here. To create an S version of the diesel-fuelled Cayenne, Porsche has dropped in a 4.2-litre, twin-turbo V8 sourced from Audi, but not before reworking it considerably with internal revisions, a new intercooler and exhaust system. What’s it like to drive? The result is an SUV that bludgeons straight sections of road into submission, thanks to 377bhp and that almighty torque figure. Despite now weighing a hefty 2195kg, it’ll get to 62mph in just 5.7 seconds. If you’re anywhere on the torque peak, from 2000-2750rpm, the way the V8 flings this car forward as if it weighed the same as an empty crisp packet is laugh-out-loud absurd. Porsche has tried hard to make the V8 sound as appealing as possible; an informed ear will guess fuel type on start up, but it’s superbly refined inside the cabin, and when you’re going for it there’s a real Detroit iron quality to the rumble from behind the bulkhead. And rumble on it will, a 100-litre tank meaning a theoretical 745-mile range thanks to a combined fuel figure of 34mpg.  It can’t cheat physics though, and while you can punt it along quickly it lacks the agility of the petrol models, it’s best to adopt a slow in/fast out policy and manage the weight carefully: ceramic brakes on a Cayenne suddenly seem like a good idea. How does it compare? It costs £1500 more than a petrol Cayenne S, offering quicker acceleration but notably better mpg and CO2 figures (34mpg and 218g/km playing 26.9mpg and 245g/km). The only rival that comes close on performance is the BMW X5 M50d, which costs £60,340 and mixes 376bhp/545lb ft performance with claimed 37.7mpg/199g/km economy. Anything else I need to know? The 5.7sec 0-62mph time and 157mph top speed seem impressive enough, even more so when you consider they compare favourably to a Porsche Cayman – a car which weighs 800kg less than the Cayenne S Diesel.