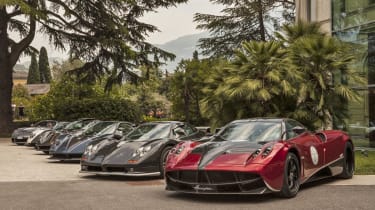 The 10th Pagani Gathering has taken place in Italy. A staple since 2004, it’s an annual event  held by the Italian carmaker to get its owners and dealers together for four days of driving their cars and showing them off. It takes place in areas surrounding Pagani’s north Italian homeland, 2014 seeing a fleet of Zondas and Huayras pay visit to Verona and Lake Garda.

Pagani has been making supercars since 1999, though it has just two model lines to its name. The Zonda is still in production, entering its 15th year courtesy of the startling new Zonda Revolucion, a 789bhp hypercar with a power-to-weight ratio that outshines the Bugatti Veyron and is only just eclipsed by the Ferrari LaFerrari.

The Huayra arrived in 2012, introducing turbocharging to the Pagani range with a twin-turbo 6-litre V12 engine, producing 720bhp and yielding a 224mph top speed. It was tied with the Lotus Exige S as the victor of our 2012 Car of the Year contest, proving as fun and accessible as the £50,000 British sports car despite its £1million price tag.

Both Paganis were represented at the 2014 Gathering, with eight Zondas in various special edition specifications and two Huayras. Look carefully in the official Pagani photographs from the event and you should also spot a sneaky Porsche Carrera GT poking its snout into proceedings…

The Gathering looks to be established as one of the many privileges of Pagani ownership now (and one which our former editorial director Harry Metcalfe attended regularly with his Zonda C12S), though if you want to take part in 2015 you’ll probably have to stick an order into the factory pretty soon…