The Pagani Zonda Revolucion is the lightest, fastest and most powerful yet. Watch out Ferrari and McLaren 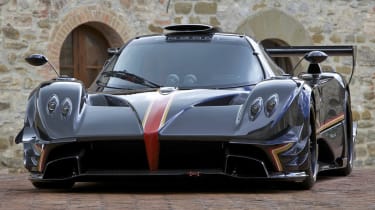 Meet the ultimate Pagani Zonda. For now. The new Revolucion is far and away the more extreme Zonda we’ve seen, yet it still looks unlikely to be the supercar’s swansong, with the new Huayra yet to claim sole custody of Pagani's production lines. The Revolucion is easily the most powerful and lightest Zonda; its 6-litre V12 engine produces 789bhp and 538lb ft, and combined with a 1070kg kerbweight – less than a Ford Fiesta ST – it serves up 749bhp/ton, a power-to-weight ratio that trumps the world’s fastest supercar, the 268mph Bugatti Veyron Super Sport.

This video shows the Revolucion in action for the first time, with the blue carbonfibre bodywork of this particular example still covered in its protective plastic wrapping ahead of being delivered:

It’s 50bhp and 14lb ft healthier than the Zonda R it evolves from and weighs 34kg less. The R hits 233mph and completes 0-62 in 3.0sec; expect those figures to improve with the Revolucion. It will also aim to beat the Zonda R’s 6m47s Nurburgring Nordschelife lap record.

Find a used Pagani Zonda for sale (some are less than £1m!) The rear wheels are driven via a six-speed sequential transmission, with Pagani bragging about 0.02sec gearchanges. There’s a 12-stage traction control system and updated ABS. The aerodynamics have undergone vast transformation, too, with carbon air deflectors on the front bonnet plus two spoilers and a huge fin on the rear deck, much like the Lamborghini Veneno’s. The eye-wateringly large rear wing also hosts a DRS drag reduction system, activated manually by a steering wheel button from a minimum of 62mph. Holding down the DRS button prompts the wing to respond automatically. There are no ‘activation zones’ like you see in Formula 1… The carbon-ceramic brakes are updated too, weighing 15 per cent less than the Zonda R’s and apparently even less prone to fade. Turning each of the Zonda’s components past the nth degree means only a fool would bet against Pagani’s previous Ring lap record being toppled, and real trouble for the McLaren P1 and LaFerrari in a game of hypercar bragging rights. It can’t be used on the road, yet the Pagani Zonda Revolucion costs 2.2 million euros plus taxes – around £2.2million at current exchange rates. That’s more than twice the price of the Ferrari and McLaren (though still around £900,000 less than the Lambo Veneno), yet that hasn’t stopped the five-strong production run selling out completely.