The French sports car maker turns its attention to a 400bhp crossover at the Paris show. Details here 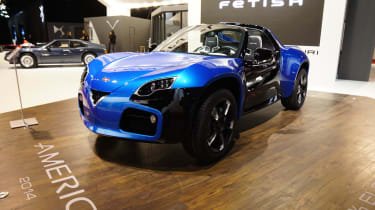 Venturi is still best known for its wedgy sports cars of the 1980s and 1990s, but since the early 2000s the Monegasque carmaker has concentrated on producing high-performance electric vehicles instead.

With 354lb ft of torque also at its disposal, performance is much stronger than the unusual looks would suggest. Venturi claims a 0-62mph dash of 4.5 seconds, a 0-124mph sprint of 14 seconds and a top speed of 137mph. Drivers have access to three modes to make best use of the powertrain - Cruising, Sport and SuperSport.

At the same time, a large 53kWh battery pack - over double that of conventional electric cars like the Nissan Leaf - allows for a 155 mile range. With a 22kW on-board charger, the company says a full charge from empty takes around 3.5 hours.

The use of carbonfibre in the America's construction keeps weight down to 1525kg despite the weighty battery pack, but the car's overall proportions are relatively compact - 4125mm long, 2060mm wide and 1450mm tall. The 280mm of ground clearance on offer (and chunky 20in, 45-profile tyres) should ensure it a modicum of loose-surface ability.

Venturi says the America is 'born for the great outdoors', which gives clues to some of the more unique aspects of its design. Doors are notable by their absence, save for a pair of vestigial bars, while the roof amounts to a single spar between the windscreen frame and rollover bar. The cockpit has a simple design, with a high central tunnel and rotary drive mode selector.

Just 25 models will be made available, with production starting in 2015. With so few available, pricing has not been revealed - interested parties will have to contact Venturi directly.