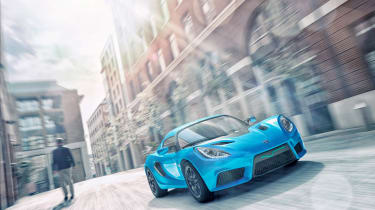 The final exterior design of Detroit Electric’s all-new SP:01 electric sports car has been unveiled as the company prepares for a production run.

The SP:01 is a lightweight electric two-seater sports car, and is set to become the fastest electric production car when it goes on sale in Europe, Asia and North America in 2015. First revealed as a prototype at the 2013 Shanghai Motor Show, the SP:01’s exterior has been subtly revised to further improve its aerodynamic performance.

The most obvious difference is the striking new fastback configuration, replacing the prototype’s flying buttresses on either side of the rear window, along with a large rear wing and an underbody diffuser, intended to improve the road-holding and ensure rewarding and accessible dynamics.

The changes to the design mean that SP:01 will indeed deliver its promise as the world’s fastest electric vehicle, completing the 0-60mph sprint from standstill in just 3.7sec and reaching an impressive top speed of 155mph. That makes it some five tenths and 25mph quicker than the Tesla Model S we drove recently, though an expected 180 mile range is some 70 miles off the Tesla. The car will be fitted with GRP (Glass Reinforced Polymer) bodywork as standard, with a carbon fibre option also available.

Founded in 1906, Detroit Electric was revived in 2008 by Albert Lam, a former Group CEO of Lotus Engineering Group and Executive Director of Lotus Cars of England, with the SP:01 their first crack at a production car. It will be manufactured at their new production facility in Leamington Spa, England.