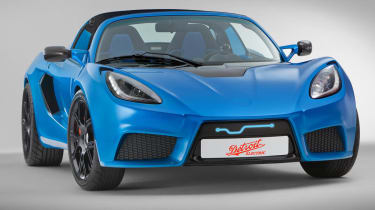 The Detroit Electric SP:01 is set to be the world’s fastest production EV. Revealed in, unsurprisingly, Detroit, the rear-wheel drive two-seater has a 0-62mph time of 3.7sec and a claimed range of over 180 miles.

Reminiscent of the Tesla Roadster, the SP:01 uses a Lotus Elise-derived aluminum platform, with even less visual tweaks. Combined with carbonfibre bodywork and a compact, mid-mounted electric motor, total weight is kept at 1070kg - 194kg heavier than a base Elise but 165kg lighter than the Tesla.

Even with a hefty weight disadvantage, it thoroughly out-accelerates the naturally aspirated base Elise and is almost a second faster from 0-62mph than the supercharged Elise S. It’s even 0.2sec quicker to 62mph than the Mercedes SLS AMG Electric Drive.

The electric motor produces 201bhp and 166 lb ft of torque allowing the SP:01 to reach a top speed of 155mph. Drivers can select one of four gear ‘ratios’ to tweak acceleration characteristics if desired, but like other EVs, this isn’t required.

Range anxiety is addressed by the 37kWh capacity of the SP:01’s battery - a strong selling-point given the compact packaging and light weight of the vehicle. A full charge takes just over four hours. In keeping with the theme of efficiency, regenerative braking technology allows the motor to be used as a generator when acceleration is halted, recovering kinetic energy and recharging the vehicle’s battery packs.

Owners will be able to check battery levels and the remaining range to recharge via ‘SAMI’ (Smartphone Application Managed Infotainment system). It can also be used to remotely operate the climate control system or locate the vehicle via GSM to help you locate where it’s parked. The SP:01 is also capable of bi-directional charge and discharge through use of the Detroit Electric company’s patented ‘360 Powerback’ technology. This means the vehicle’s batteries can be used to power your home should the need arise.