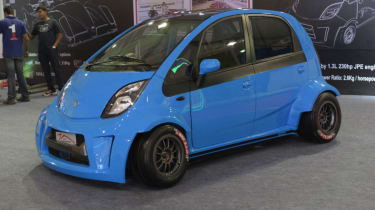 Tata Motors introduced the Nano in 2008 as a solution to bring personal mobility to the Indian masses, but with no real safety features and miserable performance sales never took off.

Price was an issue, too, because while unspeakably cheap by European standards, the four-door city car was still many, many times more expensive than a three-decade-old Honda Dream.

Now, however, the Nano is back on our radar – almost unrecognisably so. With a 230bhp mid-mounted engine, a six-speed sequential gearbox and slick tyres, JA Motorsport’s ‘Super Nano’ is to the standard car what Tony Pond’s 6R4 is to the humble Austin Metro.

Optimistically described as aerodynamic, the Super’s exterior is all about those wheel arches, which wouldn’t look about of place on a 911 RSR. They partially conceal thick-sidewalled MRF slicks charged with putting the 1.3-litre four-cylinder engine’s enormous power onto the road with the help of ‘race-tuned’ suspension. Completing the race-inspired ensemble are disc brakes all round, which is quite a thing for a Nano.

Top speed is quoted as between 112 and 124mph, which suggests that this track special has especially short gearing. Alas, no 0-60mph has been provided, although it’s surely a vast improvement on the normal Nano’s 29-second epic.

Inside is a bolt-on roll-cage, Recaro seats, a carbonfibre dashboard and paddles behind the steering wheel. Oh, and the engine, which has displaced the rear bench.

JA stresses that this car, shown at the Autocar Performance Show in Mumbai, is still a work in progress – in fact, it’s yet to be tested on track. Even so, JA is open to business for any intrepid members of the Tata Nano owners club who want a little more excitement. The car costs 2,500,000 rupees, which equates to roughly £25,000.