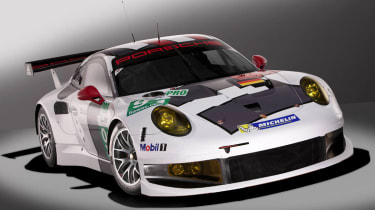 Porsche will race at Le Mans this year for the first time since 1998 with its new 2013 911 RSR. It’s based on the company’s seventh-generation 911 model, the 991. The GT racer will be joined in 2014 by the company’s attempt to seal overall victory in the Prototype class.

Two cars will be entered as a part of official factory outfit Team in the World Endurance Championship’s LM-GTE class. The number 50 will decorate both cars to celebrate the Porsche 911's 50th birthday.

The RSR carries over an optimised version of the 4-litre flat-six engine used in the previous 997-generation 911 RSR, now producing 454bhp, up from 449bhp. Power will be channeled through a lightweight six-speed gearbox supplied by Porsche Motorsport and operated via steering-wheel mounted paddle shifters.

Besides improvements to the powertrain, development focused on improving weight distribution and lowering the centre of gravity, while the wheelbase is nearly 100mm longer. One of #92 car’s drivers, Austrian Richard Lietz, has commented that the weight bias has shifted further towards the front, making the car more predictable especially over difficult undulating sections of track like that of Sebring. Lietz will be paired with German Marc Lieb, as they were when competing in the 2012 WEC.

Filling out the works team’s lineup are Joerg Bergmeister of Germany and Patrick Pilet of France who will drive the #91 sister car.