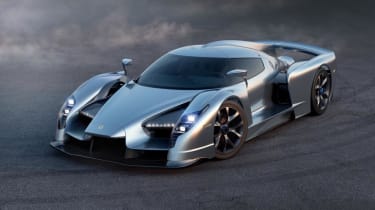 Built from the off with racing in mind, the 003 looks to push the boundaries of conventional GT cars, appearing to take heavy influence from endurance racing’s prototype classes. 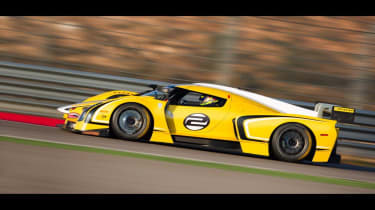 Driving the car at this years Nurburgring 24 Hours will be Le Mans racer, 12 Hours of Sebring winner and occasional evo contributor, Marino Franchitti: He said ‘I’ve only seen renderings of the road car, but if it looks half as good as the racer, it will really be a thing of beauty.’

It should be quick too, because unconfirmed rumours suggest it’ll be powered by a Honda High Performance Department based turbocharged 3.5-litre V6, with an output of around 500bhp. Though Marino isn’t allowed to confirm details as of yet, he went on to say:

‘The car’s engine is completely bespoke and has been built in-house by the Scuderia Cameron Glickenhaus team. Yes, its basic underpinnings are based on something else, but in finished form, it’s essentially completely custom built for this car.’ 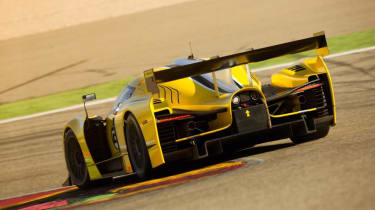 The 003C has recently undergone testing, being run on circuit against other endurance racers for the first time. We asked Marino if the test had hinted at the car’s prospects for the N24H race.

‘Until we get out there and run against all the GT3 cars at the Nurburgring, we just don’t know. We’ve got to be focusing on reliability first; once we get that sorted we can take it from there. But first we have to put miles on the car.’

The car was designed in Turin, Italy by Granstudio, and appears to borrow lines from the likes of the Ferrari Enzo, Audi’s R18 Le Mans racer and perhaps even the Lamborghini Veneno. Though it looks like a proper prototype, the car will compete in GT classes.

‘It feels like a GT car first of all, because of the comfort and field of vision. The attention to detail is incredible; it’s just a beautiful car to look at and drive’ explains Marino.

‘Admittedly it does have a lot of LMP characteristics: the aero and the roofline for example. But at the end of the day it’s still a proper GT car, weight wise and with its power output. I’d describe it as a very aggressive GT car.’

So how much of the racecar will trickle across to its road going version? Marino’s input could have quite an impact on the supercar:

‘The race car was the first to run, so a lot of stuff learned from that will naturally carry over to the road car; setup changes and improvements to finish included. I know from driving the race car that the road version will be built with fantastic attention to detail.’

Marino will race the 003C at the Nurburgring 24 Hours over the weekend 16-17 May. Before he does, the racer and its 003S road going sibling will make their public debuts at the Geneva motor show in March.

Check back on evo.co.uk next week for when we meet the car in the flesh. Until then, you can watch R&T’s video below to hear the 003C prototype’s turbocharged V6 in action below.