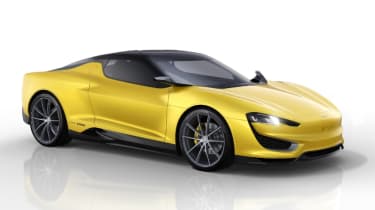 Supercars might make the headlines at the Geneva motor show but Geneva is also a hotbed for innovative concepts and new technology.

Engineering firm Magna Steyr is one of those showing a forward-looking concept at the show, in the form of the Mila Plus.

The concept is a compact, lightweight sports car with a hybrid drivetrain. In layout, it isn’t dissimilar from the BMW i8 – there’s a mid-mounted three-cylinder petrol engine, and an electric motor at each end providing all-wheel drive traction and extra performance.

Combined power of 268bhp and peak torque of 786lb ft enables a 0-62mph acceleration figure of 4.9 seconds, while there’s enough power from the twin electric motors to reach 50mph in 3.6sec.

Despite the promised performance, CO2 emissions of 32g/km suggest low consumption too – around 205mpg. This should be taken with a pinch of salt however, as the European fuel consumption test makes healthy use of the electric range of hybrid vehicles. In the Mila’s case, that range is just under 47 miles on electric power.

Weight is similar to the i8, the Mila Plus just a shade heavier than the 1485kg BMW at 1520kg. Where the two differ is in construction: BMW’s effort pairs a carbonfibre-reinforced plastic tub with aluminium subframes, while Magna Steyr uses an extruded aluminium spaceframe.

In this context, the structure is lower weight than the equivalent steel chassis, has a modular setup and can be adapted for various driveline configurations.

The aluminium is then clad in plastic body panels – corrosion-resistant and offering greater styling flexibility. In this respect, the Mila Plus is every inch the modern sports car, with body panels seemingly stretched around the car’s structure.

The Mila Plus makes its debut at the 2015 Geneva motor show on March 3.