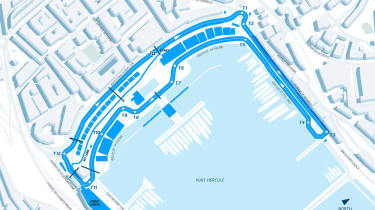 The circuit layout for the Monaco ePrix has been revealed. The 12-turn, 1.76km course is a modified version of the traditional Grand Prix track, and will play host to the innovative electric series Formula E for round seven of its inaugural championship on May 9.

The revised circuit will retain the start-finish line and pit complex of the Grand Prix track, but rather than follow the usual route up the hill towards Beau Rivage, Massenet and Casino Square, drivers will turn tighter at Sainte Devote before navigating a tight left, rejoining the Grand Prix course at the chicane - which now becomes a hairpin. The layout remains subject to FIA approval and track homologation.

Former Monaco GP winner Jarno Trulli, owner and driver of his own Formula E outfit Trulli Grand Prix, said, 'I think it’s a reasonably good track and obviously the location is fantastic. It takes in half of the Formula 1 circuit, which is enough for the Formula E car and I’m sure it’s going to be good for overtaking.'

Although a major overhaul, this is certainly not the first time that the iconic circuit has been altered. In 1973 the track was changed after the construction of a harbor front swimming pool forced drivers to take a different route after Tabac, giving the lap four more corners. Furthermore, in the same year, the tunnel was extended due to the building of the Loews Hotel (which subsequently gave its name to hairpin after Mirabeau), adding an extra challenge to the already daunting course.

Additional revisions include the altering of Saint Devote, which was originally a faster, sterner challenge, but was tightened in 1976, whilst a barrier sat on the apex until 2003, when it was felt necessary to move the barriers further away, thus allowing drivers more room to manoeuvre in the inevitable first corner mayhem.

Moreover, the Nouvelle chicane was changed in 1985, before which the cars navigated a super-fast left/right chicane at around 160mph. After calls from drivers to make changes under safety grounds, a circuit extension was constructed, allowing organizers to produce a slower, tighter corner, and barely detracted from the spectacle, as one of the few corners that could vaguely present an overtaking opportunity…

Smaller alterations were mainly aimed at improving run-off. Barriers were moved at the entry to the swimming pool complex in 2003, creating a faster exit. The pit complex was altered significantly in 2004, allowing the drivers to exit in a safer position, past the first corner.