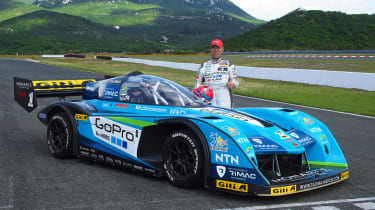 Rimac Automobili, the Croatian firm aiming to bring a 1088bhp electric supercar to market, will put its name to another hugely powerful electric vehicle at this year’s Pikes Peak International Hill Climb later this month.

The car will be driven by Nobuhiro ‘Monster’ Tajima, who already holds the electric record at Pikes Peak in Colorado with last year’s car, with a time of 9:43.9.

This year’s vehicle, the Tajima Rimac E-Runner Concept_One, is a development of last year’s vehicle, but power has increased significantly thanks to Rimac’s own electric drivetrain.

At 1.1 megawatts – about 1475bhp, with 1106lb ft of torque – the new car is over twice as powerful as Tajima’s 2014 car. Unlike its internal combustion engined rivals, which lose over 40 per cent of their power as the road climbs to its peak at 4301m above sea level, the E-Runner will develop its output over the full 12.42-mile course.

As well as lossless power, the electric racer’s other benefit is simplicity. There are no gearboxes or differentials, instead using four independent electric motors with reduction chain drives.

Rimac’s proprietary All Wheel Torque Vectoring system, as used in the road-going Concept_One, controls the torque of each motor 100 times every second, adjusting output according to steering angle, speed, longitudinal and lateral forces, yaw rates and more.

Performance is predictably strong – 62mph arrives in 2.2 seconds from rest, 124mph in 5.4 seconds. A battery pack of 57kWh capacity (over double that of a roadgoing electric car such as the Nissan Leaf) will provide enough juice to scale the peak.

Four, 340-section tyres wrap 18-inch wheels all around, supporting a 1500kg kerbweight via adjustable dampers. Stopping is handled by both a set of 370mm discs and Rimac’s 400kW regenerative braking system.

This year’s Pikes Peak International Hill Climb – colloquially known as the ‘race to the clouds’, takes place on June 28.