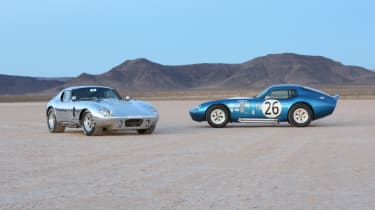 There’s a lot to be said for the progress performance cars have made over the last 50 years, but sometimes all you want is a sleek 1960s body, a thundering naturally-aspirated V8 and a couple of racing stripes.

All can be provided by Shelby American’s latest run of 50th anniversary Cobra Daytona Coupes. Just 50 will be built, available with either an aluminium or fibreglass body, and the car follows on from the limited-run 50th anniversary edition Shelby Cobra.

The original Daytona Coupe was another example of American muscle fending off the might of Ferrari’s racing division. While not inspired by the same animosity that saw Ford beat Ferrari at Le Mans, Caroll Shelby nevertheless took the fight to the Italian marquee in the FIA Sports Car Championship.

The 50th Anniversary celebrates that victory, rather than the car itself – which made its debut in 1964. The latest cars are period-correct, from the leaf spring suspension and tube chassis, to the slim wooden rim of the steering wheel. 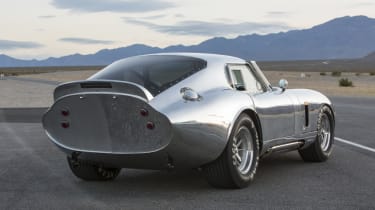 At the same time, Shelby American has made subtle improvements in several areas, to the benefit of quality, safety and performance. The new cars feature a premium black leather interior, modern disc brakes, and a stronger tubular frame.

The Peter Brock-designed body is as stunning as ever, though you’ll pay for the privilege. In aluminium, you’ll pay $349,995 and fibreglass versions start at $179,995.

Neither of those prices include a drivetrain, either – you’ll pay extra for the 289 cubic inch, aluminium block V8 offered by the Shelby Engine Company.

But when original Daytona Coupes change hands for $7-8million, the latest 50th anniversary car seems something of a bargain.