Auctioneers Coys chalked up interest in the Oldtimer Grand Prix at the Nurburgring to the lack of a German F1 race in 2015.

'For such an important car to come to the market, it created interest from around the world and was in the end sold to a delighted German buyer, followed by a round of applause in the auction room,' said Chris Routledge, Managing Partner at Coys, of the sale.

With a 1989 F40 expected to reach $1.2-1.5million at Mecum’s Monterey auction later this month, there's every chance that number will be beaten again.

Porsche 911s featured heavily in the auction, and all were stars in their own right. Perhaps the most special is lot 147, a 1976 ex-works Safari Martini Porsche 911 driven by Bjorn Waldegard.

First built by the Porsche Competition department to contest the 30,000 kilometre London Sydney Marathon. It failed to make the top ten – but only because the car arrived in Australia two days late due to shipping problems.

It later competed in Australia, and was later still converted to Paris Dakar specification, with a works 953, 3.2-litre Dakar-spec engine. Coys describes the car, not unreasonably, as ‘unstoppable on any road conditions or terrain.’ 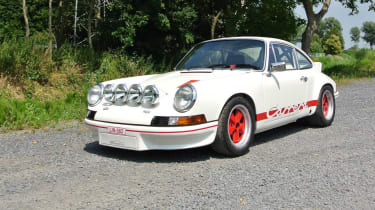 We'll update this story with further results as they're published.