Classic 1960s cars, an F40, and more will star at this month's auction in Monterey 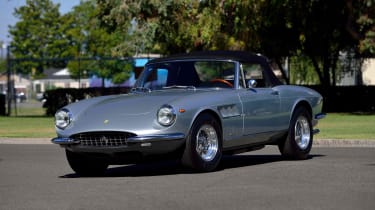 A 1968 Ferrari 330 GTS will lead auction estimates at the upcoming Mecum event in Monterey, California, later this month.

Originally presented at the Paris Auto Salon in October 1966, the 330 GTS joined the hard-topped GTC in Ferrari’s range, and used the same 4-litre, 300bhp V12.

This particular car featured on the cover of the December 1969 issue of Road & Track magazine, and subsequently found a home with Bill Harrah – an American businessman best known as the founder of Harrah’s Hotel and Casinos.

In 1972, the car was sold to another businessman in Colorado Springs, and since 2010 has resided with a third owner. It has covered 25,000 miles and even features the original factory exhaust system. 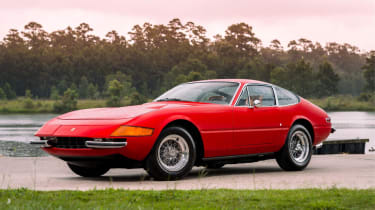 The final million-dollar car is a 1872 Ferrari 365 GTB/4 Daytona. In stunning red paintwork, the car could reach $1-1.2million at the Mecum event.

Other Ferraris in the auction aren’t quite as expensive, but many are equally special – classic fans will be satiated by a 1973 Dino 246 GTS, which could break the $400,000 mark, and the white Miami Vice Ferrari Testarossa.

More modern examples crossing the block include a 2011 Ferrari 599 GTB Alonso Final Edition – named for the F1 star previously with the Scuderia but now at McLaren, and a 2003 575M with the Fiorano handling package. Amazingly, this latter car could reach half a million dollars.

The Daytime Auction will take place at the Hyatt Regency Monterey Hotel and Spa, and Del Monte Golf Course in Monterey.