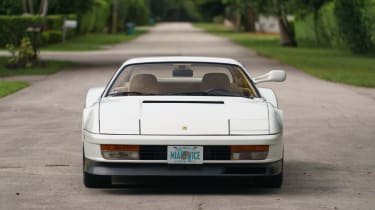 The Ferrari Testarossa is already a fast-appreciating classic, enjoying a resurgence in popularity as its even more expensive forebears climb even further out of reach.

It’s also an icon of 1980s pop culture, thanks in part to its appearance in the Outrun videogame and equally, its starring role in the American television series Miami Vice. Driven by characters "Sonny" Crockett and "Rico" Tubbs, this particular white Testarossa is being offered for sale at the Mecum Daytime Auction on August 15 in Monterey.

Launched as a successor to the Ferrari 512 BB and using a famous name from the firm’s heritage, the Testarossa carried on the BB’s flat-twelve layout. Its 4.9-litre displacement realised 385bhp and 361lb ft through a five-speed manual transmission and limited-slip differential.

According to the factory, the car could accelerate to 62mph from rest in 5.8sec, and head on to a 171mph top speed.

The Testarossa’s performance and handling was highly rated in its day, but subsequently gained a reputation as a bit of a monster – McLaren F1 designer Gordon Murray in particular describing it as ‘dreadful’ in an old column in evo.

Driven by Henry Catchpole in issue 185 though, the Testarossa displayed several talents – not least a ‘magnificent’ engine, fantastic visibility and enough steering lock to give you a chance at taming the ‘intimidating’ handling.

The Testarossa’s role in Miami Vice was less demanding than an evo road test, but certainly more glamourous. According to Mecum Auctions, it’s rumoured that Enzo Ferrari himself happily supplied two cars for the show. They were originally painted black, but series producer Michael Mann chose to repaint the car white for better visibility in night scenes.

A total of 16,124 miles have passed under its wheels since new, a figure authenticated by Ferrari North America and Ferrari Classiche, with a full service history from Shelton Ferrari in Ford Lauderdale, Florida.