Toyota puts engineering on show in Kikai concept for Tokyo 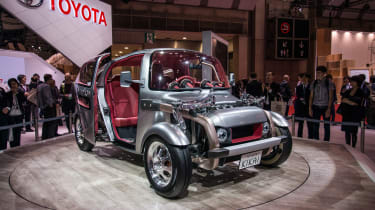 At a time when so many manufacturers hide their technology behind layers of plastic and numerous display screens, or eschew internal combustion altogether, there’s something hugely gratifying about a car that puts its components on show.

It’s why we love the sight of an F1 car denuded of its bodywork, and why the sight of an Ariel Atom’s suspension components – and indeed its hard-working driver – is such a spectacle through its tubular frame.

Toyota isn’t the first company you’d expect to create a car whose mechanicals on show – its mainstream products are better-known for isolating you from the action – but the Kikai concept Toyota has unveiled in Tokyo is quite different. 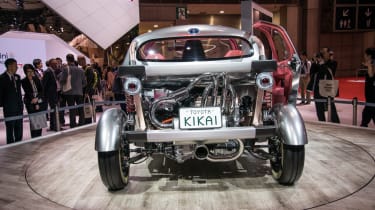 It’s what you might call ‘mechanically beautiful’. Unconventional looks are just a sideshow to its architectural suspension structures, bare frame, exposed mid-engine and polished exhaust system.

The end result comprises elements of several automotive genres, from beach buggies, to hot rods, to the unusual, low-volume bubble cars of the 1950s and 1960s.

The interior too is bizarre, with a McLaren F1-style one-plus-two seating layout, small windows in the front bulkhead through which the wheels and steering components can be viewed, and an array of large, circular instruments similar to those you might see in a vintage aeroplane. 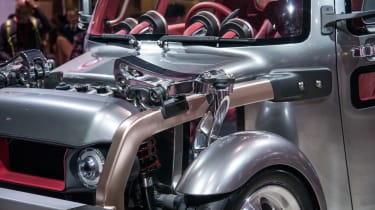 Fuel level is indicated by what appears to be an actual fluid level, while the steering wheel is thin-rimmed in a way unseen (Morgan 3-Wheeler aside) since the 1970s. Look over the aviation-style dials and the liquorice-rimmed wheel and you’ll see the suspension’s upper control arms moving up and down.

Toyota hasn’t released many details of the concept, but does say that Kikai ‘makes the car’s mechanical parts something to be seen and admired, rather than concealing them from view’.

Even if a small, pod-like car isn’t itself a particularly evo concept, we’d certainly get behind ideas that make the car’s inner workings something to admire. It joins several other unique concepts on Toyota’s Tokyo stand – including the Mazda MX-5-rivalling S-FR sports car concept.