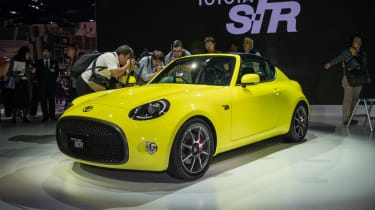 Toyota has launched a new sports car concept at the Tokyo motor show. Called the SF-R Concept and seen here in our live gallery from Tokyo, the 2+2 features a front-mid-engine and rear-wheel-drive layout, and could preview a back-to-basics production model to rival the Mazda MX-5.

No details for the car’s powertrain have yet been released, but Toyota has confirmed the concept’s dimensions include a 3990mm length, 1695mm width and 2480mm wheelbase, suggesting it would sit below the slightly larger GT86 in Toyota’s model line-up.

The car’s exterior and overall shape hark back to the Sports 800 of the 1960s (those headlights and that upright glasshouse are clearly influenced by the classic), supporting Toyota’s remarks that the S-FR would mix the simplicity of an entry-level model with a raw driving experience – something the Sports 800 was famous for. 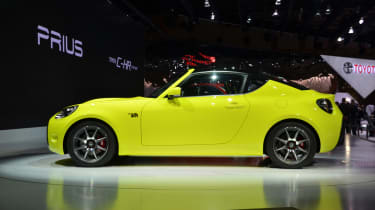 This philosophy is further cemented with confirmation that the front-midship sports car will feature a six-speed manual gearbox and all-round independent suspension, giving it all the right ingredients to become a true drivers’ car.

As exciting as it all is, there’s no word as to whether the S-FR will make production – though given the international success of the GT86 and gap in Toyota’s model range for an MX-5 rival (a base GT86 costs £4205 more than an entry-level MX-5), there’s good reason to believe it will do.

Japanese firms appear to be leading the way with driver-centric sports cars at the moment, with the GT86 and MX-5 two poster boys for affordable drivers’ cars. And now with the arrival of the S-FR Concept, Toyota joins Honda in previewing a lightweight sports car for the future – the latter’s bike-influenced Project 2&4 was a firm favourite at the recent Frankfurt motor show.