Competition versions of turbocharged supercar revealed at final round of 2015 series. Updated with video 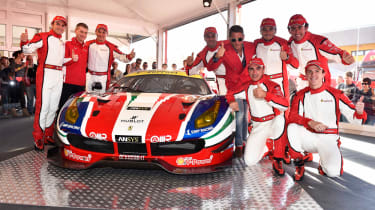 Ferrari chose to reveal the racing versions of its 488 GTB supercar at its Finali Mondiali event at Mugello Circuit over the weekend. Giancarlo Fisichella and James Calado joined fellow Ferrari drivers to pull the covers off the new 488 GTE and GT3, with both cars set to make their competition debuts in 2016.

The 488 GTE will replace the 458 GT2 as the carmaker’s latest offering for Le Mans and the World Endurance Championship, and benefits from less restrictive GTE regulations for next year. The changes mean the 2016 cars are expected to be up to two seconds a lap faster than their predecessors, largely thanks to less restrictive limits on downforce. Wearing AF Corse livery, the revealed 488 GTE gains a large front lip spoiler, fixed rear wing and three-part diffuser. 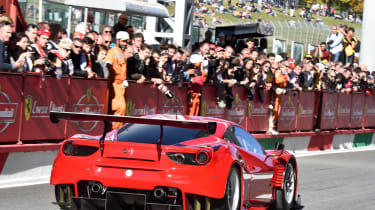 The red 488 GT3 – which also replaces its 458 equivalent – gains similar aerodynamic addenda, but conforms to GT3 regulations. Both cars are powered by the 488’s twin-turbocharged 3.9-litre V8, but thanks to power restrictions in both categories, will produce significantly less than the road car’s 661bhp. You can hear how the engine sounds in the video below.

The GTB’s seven-speed dual-clutch transmission will also be replaced by a race-spec sequential gearbox, which will send power to the rear wheels without the assistance of the road car’s Slide Slip Control 2 (SSC2) software. 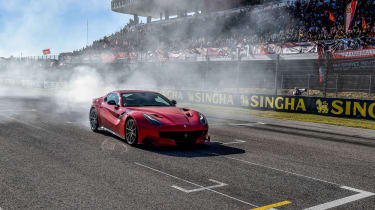 Some straight-line performance will be clawed back thanks to the race models’ significant weight loss. Though numbers for the new cars are unconfirmed, the 458 GT2 shed 240kg compared to its road equivalent, so we can expect a similar saving with the 488. And with more downforce and slick tyres part of their armoury, the race cars will be significantly faster over a lap.

Also in attendance at Ferrari’s Finali Mondiali event was the new F12tdf. The hardcore F12 is both lighter and more powerful than the regular car, and wears more aggressively styled bodywork with extra air intakes and a larger rear diffuser. Demonstration runs at Mugello provided fans with their first chance to hear the production-ready model in action on track. 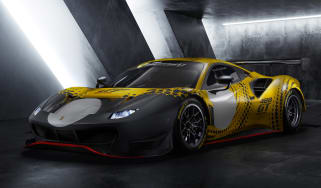