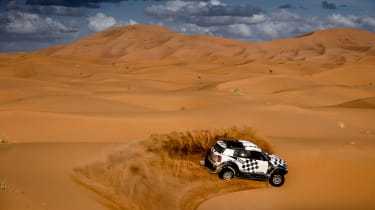 The 2016 Dakar Rally has begun! It’s Saturday evening as I type and I’m waiting to board a flight from Buenos Aires, where I watched the ceremonial start, to the in-land city of Cordoba. The competitors drove on from the start ramp earlier this afternoon to an 11km prologue stage – which determined the running order for the first leg – before continuing on towards Cordoba themselves.

The real action gets underway tomorrow morning and I’m going to be spectating for the first two days of the rally. Lucky sod. I’ll update this blog each evening and I’ll try to give you a flavour of the event from the ground.

As a World Rally Championship fan I’m excited to see how Dakar newbies Sebastien Loeb and Mikko Hirvonen fare over the next two weeks. Loeb in particular is a personal hero so I’m hoping he can mix it with the established big names of long distance, cross-country rallying like Stephane Peterhansel and Nasser Al-Attiyah in his Peugeot 2008 DKR. 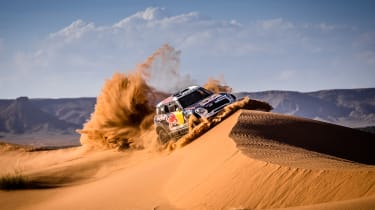 Let me give you some of the more staggering numbers. Over 15 days the competitors will cover 9596km. Almost half of that – 4775km – is timed special stage. The route runs north from Buenos Aeries and into Bolivia before returning to Argentina. The longest single special stage runs for 542km. How the drivers maintain concentration over that distance while battling dunes, rocky tracks, mud and heat, I don’t know. I’ll try to ask some of them.

The lead British entrant is Harry Hunt. He’s driving a Mini All4 Racing under the X-Raid Team banner. He’s an experienced rally driver but he’s relatively new to rally raid and this is his first Dakar. You’ll find an interview with Harry in the latest issue of the magazine.

Right, my flight is boarding. It’s just occurred to me that when I arrive back in the UK on Wednesday morning, probably short on sleep and a little worse for wear, the drivers will still have another nine days of flat-out competition ahead of them. There’s nothing quite like the Dakar Rally.