Current WRC regulations not providing enough excitement? These would probably do the trick... 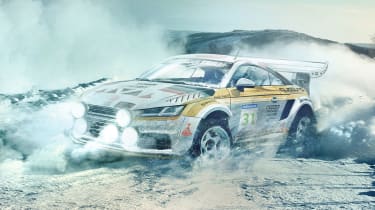 If pure speed were the be-all and end-all, modern WRC cars – which are quicker down a stage than the Group B monsters of the 1980s – should make for a thrilling spectacle.

Despite this, it’s difficult to muster up any real excitement for the series in its current form, and we’d be surprised if the slightly more extravagant cars due in 2017 change that a great deal.

Perhaps these would do it, however. Carwow has commissioned a series of rally car renders based on a range of modern vehicles, from hotted-up superminis to rear-drive V8 muscle cars.

Each gets an historic rally livery and a range of bodywork modifications that elevate them (both literally and figuratively) above their humbler roadgoing counterparts. 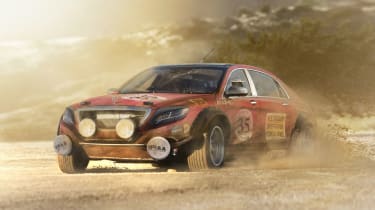 Among the renders are a Martini-liveried Alfa Romeo Giulia – no doubt quite a monster with its 500-horsepower, rear-wheel drive layout – and a reinterpretation of the Lancia Delta Integrale, based on the modern Delta and resplendent in Alitalia colours.

More unsusual are a rallying take on the Mercedes-Benz S-class that takes its inspiration from the famous ‘Red Pig’ AMG, and for even greater luxury on the stages, a rally-prepared Rolls-Royce Wraith.

None look quite as right as the reimagined Alpine however, based on the recent Alpine concept car and liveried like its historical A110 predecessor. The RS200-coloured Mustang looks great too, and VW’s boxy Touran MPV makes for a fantastic Dakar raid vehicle, in familiar Red Bull colours.

It’s hard to argue with the new Audi TT in full Audi Sport white and yellow warpaint, either. Which modern road cars would you turn into a WRC vehicle? There’s got to be some mileage in a mid-engined Ferrari…