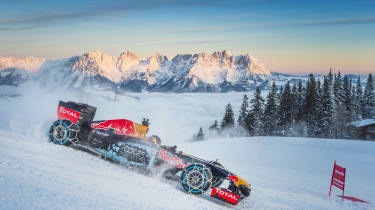 Red Bull has introduced F1 cars to some fairly strange places in the past, so we shouldn’t really be surprised the squad has now driven a car up a ski slope.

Specifically, F1’s youngest-ever driver Max Verstappen has, as you can see in the video above, and the winter wonderland location is Kitzbühel in the Austrian Alps

The car is Red Bull’s RB7, from the 2011 championship season. Red Bull's promo cars are perhaps the most abused F1 cars in history, having negotiated terrain as varied as the unsurfaced track layout of Circuit of the Americas, the helipad on top of the Burj Al Arab in Dubai, and taken part in a full pit stop in Parliament Square in London.

After such trials the cool alpine air is probably welcome, and it’s clear the car has had plenty of work to achieve its latest stunt – a raised ride height, studded tyres and a set of snow chains for extra grip. 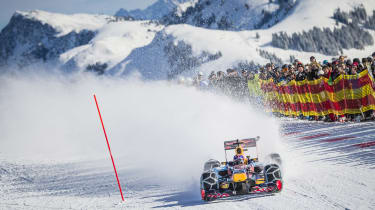 Unfortunately the video has had plenty of work too and it’s hard to make out the RB7’s screaming V10 over the sound of thumpingly dramatic music (the sound isn’t a patch on our latest Lamborghini Aventador SV video…), but it’s difficult to argue with the scenery.

Even if Bernie Ecclestone isn’t now frantically scribbing notes in his evil lair on how to make F1 more exciting – it’s only a few steps from sprinklers to ski slopes – it’s a reminder that a spectacular location is often part of the appeal of F1 circuits.