With other supercars rising in value at a staggering rate, one Porsche Carrera GT offered at auction currently looks great value 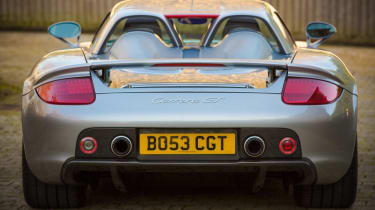 The Porsche Carrera GT is one of the all-time great supercars - so great, we chose to include it in one of our most popular tests ever, in our Analogue Supercars issue and video.

You could also make an argument for it being one of the best value, given that a 2004 example is expected to make between £400,000-£450,000 at the upcoming Silverstone Auctions Race Retro sale.

That’s still a lot of money of course, but when the Carrera GT cost £330,000 new, that estimate indicates a far slower rate of appreciation than many of its contemporaries. Ferrari’s F50 - also included in our test - easily hits seven-figure sums at auction, while the distinctly less exotic 911 GT3 RS 4.0 is already reaching prices not far short of the GT’s estimate.

Only 1270 Carrera GTs were made, and this example is in one of the more familiar colours - Silver Metallic. It was delivered new on April 15, 2004 at Champion Porsche of Pompano Beach, Florida, with most of the option boxes ticked - including a leather luggage set.

The example being auctioned later made its way to the UK in 2009, and has been owned by the current vendor since 2013. In the owner’s tenure, it’s enjoyed two full services and an RUF suspension-raising system, at a cost of 11,900 euros.

The Silverstone Auctions Race Retro sale will take place at Stoneleigh Park in Warwickshire, on the 27-28 February.