If Renaultsport did crossovers, the Kwid racer would be it - but only for markets outside Europe 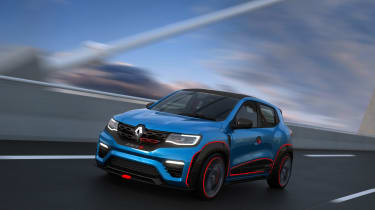 You probably aren’t too familiar with the Renault Kwid. And even if you were, it probably wouldn’t be on the shopping list of many evo readers: as a crossover-styled supermini, it's less exotic even than Renault’s own Captur.

The Renault Kwid Racer probably wouldn’t sell for such a price, but it’s much more up evo’s rue. No Renaultsport badges are present, but the ethos is certainly there.

Where the regular Kwid sports 180mm of ground clearance to sail over the unmade roads common in India, the Racer concept sits low on 18-inch alloy wheels and low-profile tyres.

Renault has adopted the full complement of racing-inspired features to help the Kwid Racer stand out. A deep front splitter? Check. Carbonfibre elements? Those too, found on the wheel arch extensions and on selected interior surfaces. There’s a roll cage, a pair of bucket seats – rear seats are notable by their absence – and liberal use of Alcantara.

Back outside, the rear is embellished with a large diffuser and a prominent tailgate spoiler. Anodised red details highlight the Kwid’s shape. Styling elsewhere is very much of the current Renault design language, from its prominent grille and large Renault badge, to the curvy rump and C-shaped daytime running lights.

No engine data or performance figures are quoted, though the standard Kwid engines are like those found in the Twingo – a 0.8-litre turbocharged three, and a non-turbocharged 1-litre triple. Whatever the Racer uses, drivers can view telemetry data on interior displays, while the rev counter is also a digital item.

The Kwid Racer concept is being presented at the New Delhi auto show, alongside an off-road inspired concept, the Kwid Climber, and new variants of the standard vehicle. Renault has reiterated that there are no plans to offer the Kwid in Europe though, so for that small selection of you hoping for a Renaultsport-like compact crossover, your plans continue to be dashed.