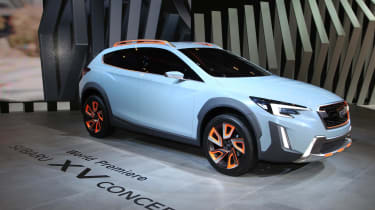 Subaru's 2016 Geneva motor show lineup isn't the most exciting we've ever seen, but its new XV concept does at least give us a look at the brand's future styling - an arena in which the current range is arguably lacking.

The latest concept should determine the design direction of the XV road car in particular – a crossover based on the Impreza platform. Subaru calls the design language 'Dynamic X Solid', which isn't the catchiest phrase but is meant to refer to the characteristic Subaru all-wheel drive and the robust appearance of Subaru models.

While the roadgoing XV features only a handful of visual changes from the five-door Impreza, mainly aimed at beefing up the rather anonymous body, the concept adopts several cues seen on recent Subaru concept cars, from slim, 'hawk-eye' C-shaped headlights and tail lights, to heavily-stylised alloy wheels and in this instance, a tough-looking front scuff plate and chunky wheel arches.

While there's nothing groundbreaking about the look, there's also very little that shouldn't find its way into the eventual production XV, save perhaps the 19-inch alloy wheels and some of the more outlandish elements to the headlights and bumpers. Subaru quotes measurements of 4520mm long, 1920mm wide and 1570mm tall, which makes it longer and wider than the current car, but identical in height.

It wears a new paint finish too. Called Glacier Khaki Silica - which does sound a little like the result of picking three words from a dictionary at random - it's 'designed to evoke the appearance of glacier ice'.

You can follow all our Geneva coverage on our hub page. 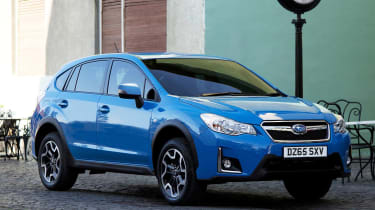 While the Geneva concept previews the look of the next-generation XV, Subaru has lightly revised the XV road car for the 2016 model year.

Those not intimately familiar with the existing model will struggle to see the differences, but externally Subaru has updated the car’s ‘hawk-eye’ headlights, and applied a redesigned front grille and bumper.

The interior enjoys greater changes, with improvements in quality and finish, and a new 7-inch touchscreen infotainment system. There’s a new look to the instrument cluster too, and a new rear-view camera with a wider field of view.

Thrilling stuff it ain’t, but it should make the XV slightly more pleasant to live with. Cheaper too, thanks to engine revisions to the 2-litre petrol and diesel flat-four powerplants.

A 4 per cent fuel efficiency improvement on the diesel lifts its combined cycle figure to 52.3mpg, and drops CO2 to 141g/km. With 147PS and 350Nm at its disposal, the 0-62mph sprint takes a respectable 9.3 seconds.

The petrol model is less frugal at 43.5mpg (with a CVT gearbox), and a touch slower at 10.5sec to 62mph (10.7sec with the CVT), but it too has seen small efficiency improvements.