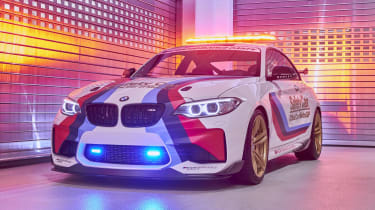 Yamaha might have dominated last season’s MotoGP championship, but another brand had an equally strong presence on the grid at the start of every race.

Not arch-rivals Honda, but BMW, which has long supplied the series with its safety cars. From 2016, that safety car will be a BMW M2, replacing the BMW M4 used during last year's season.

BMW first partnered with the MotoGP circus in 1999, and since 2006, BMW M Division vehicles have been the official cars of the series, serving as both safety and medical cars.

Cars as diverse as the Z4 M Coupe, M5 and M6 Gran Coupe have taken to the grid, with X5s, BMW motorcycles and more acting as support and medial vehicles.

The latest M2 will be as striking as its forebears, presented in M Divison’s tri-colour stripes on a white body. Not an easy colour scheme to miss, and even less so once a roof-mounted flashing light bar is fitted and LED lights installed in the lower grille. BMW's signature halo headlights also flash, all operated with a bank of switches in the cabin. 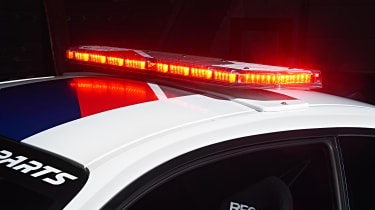 The 272kW, turbocharged inline-six remains standard, though engineers have improved the car’s cooling to deal with the demands of fast track use. A series of BMW M Performance parts have also been fitted – from exhaust systems to carbon side skirts, a carbon rear wing and carbonfibre interior trim.

Recaro racing seats take the place of the M2’s usual pews, and there’s a roll cage to enhance the Safety Car’s safety. Certain components – including the wing supports and the alloy wheels – are painted gold, further distinguishing the car from its roadgoing cousin.

This season, the M2 will be supported by a BMW X5 M and M550d xDrive Touring as medical cars, while the series’ safety officer will drive a BMW M5. Two BMW S 1000 RR motorcycles will serve as safety bikes.

The 2016 MotoGP season begins with a floodlit night race in Qatar on March 20th.