The latest variant of Eagle's aluminium-bodied, handbuilt E-types is now on sale 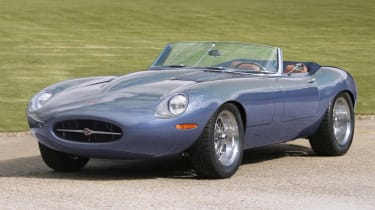 One wouldn’t imagine there’s much room for improvement in the Jaguar E-type’s styling, but Eagle has long proven there is indeed potential to make the British sports car even more beautiful.

The latest evidence is in the new Eagle Spyder GT, which joins the orginal Speedster model and the race-inspired Low Drag GT in Eagle’s range of handbuilt, aluminium-bodied models.

If you’re struggling to tell the difference between Speedster and Spyder GT at a glance, the easiest way to differentiate the pair is to look above the curvy waistline.

The Spyder GT’s windscreen is just a smidgen taller and, aft of the seats, there’s a tonneau cover hiding a retractable roof – giving owners greater weather protection than is available in the Speedster.

Cars are – naturally – built to the individual client’s specifications, but in terms of underpinnings the Spyder GT is much like the Low Drag GT.

The engine is a 4.7-litre version of the E-type’s inline-six, fuel injected for performance and reliability and capable of 346bhp. ‘In any gear, open up the throttle and the slippery shape surges forwards, piling on the speed, the engine’s gruff voice filling the cabin more fully’, said Henry Catchpole of the Low Drag GT in evo 195.

The aluminium construction should result in a weight of little more than one metric ton, and performance will be in the 160mph-plus/sub-5sec-to-60mph ballpark. And going over the car with a fine-tooth comb, you’ll struggle to find any flaws, either mechanically or aesthetically.

‘Development of the Spyder GT began soon after the launch of the Speedster in 2011,’ explains Paul Brace, Eagle’s design director, ‘and, like everything we produce, we wanted to ensure that we got as close to perfection as humanly possible.’

No prices have been revealed – that will depend very much on an individual car’s specification – but given previous Eagles have cost well north of £500,000, you can once again expect similar of the Spyder GT.

Eagle will deliver the first Spyder GTs to customers this summer.