It's not quite a Phaeton, but VW is aiming its latest luxury four-door saloon at the Chinese market 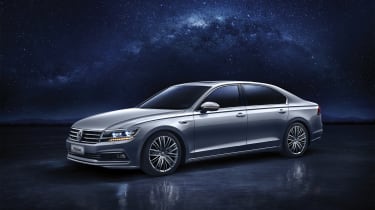 Remember the Volkswagen Phaeton? Of course you do: The hilariously over-engineered luxury saloon was one of Ferdinand Piech’s seemingly budgetless projects during his time at the helm of Volkswagen, alongside the Veyron and the fuel-sipping XL1.

While the luxury Volkswagen is a concept that still doesn’t quite wash with European buyers, Chinese customers lap it up, and the new VW Phideon is – if not quite engineered to Phaeton standards – the latest VW premium saloon to enter that market.

There are no W12 petrol engines or V10 diesels here, but a body measuring more than five metres long (over a foot more than a Passat, and longer even than the 4861mm Skoda Superb), an extra-long wheelbase (over three metres) and extended proportions are designed to appeal to the Chinese market’s love of saloons.

The Phideon sports five seats, and is positioned above the Passat and the China-only Magotan (a refreshed previous-generation Passat). Aesthetically, it draws upon the former for inspiration – albeit enlivened with glitzy chrome trim and an even more prominent grille and VW badge. 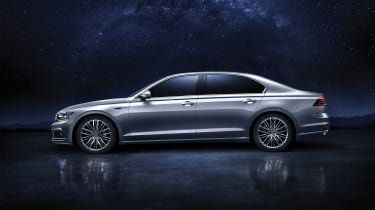 Under the long bonnet is a 3-litre, turbocharged and direct-injected V6 producing 295bhp and 325lb ft of torque. 4Motion all-wheel drive is standard, though an entry-level model with front-wheel drive and a 2.0 TSI engine is also planned.

Jointly developed by VW in Germany and Chinese subsidiary SAIC Volkswagen, the Phideon will be sold only in the Chinese market. Nevertheless, it’s making its debut at the 2016 Geneva motor show – and you can catch up with all the latest news on our show hub page.