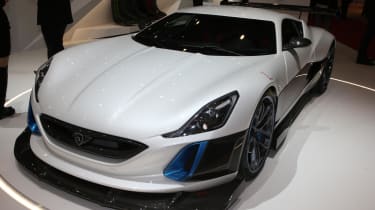 If you thought Bugatti and Koenigsegg would get away with stealing the hypercar headlines at the 2016 Geneva motor show, you can think again.

Croatian firm Rimac Automobil, best known for the Concept_One hypercar, has revealed its latest model. The Concept_S is a car that promises Bugatti-rivalling performance with a clean conscience – as like the Concept_One, it’s powered entirely by electricity.

Big numbers have become rather a theme of the latest hypercar launches, and they’re no less impressive here. The Concept_S puts a full 1365bhp and 1328lb ft to the road, via a system the firm calls ‘R-AWTV_S’ – or Rimac All Wheel Torque Vectoring_S.

As the system is able to decide which wheel can accept the greatest power at any one time, it can provide ‘unseen flexibility and grip’ for a 2.5-second 0-62mph run.

The next figure is even more impressive, as the Concept_S is claimed to beat the new Bugatti Chiron to 124mph by almost a second – 5.6sec versus 6.5. Where the Bugatti takes 13.6sec to reach 186mph (300km/h, if that figure sounds arbitrary), the Concept_S has passed it half a second earlier.

It should stop briskly too (despite an 1800kg kerb weight), with four-wheel regenerative braking power of 400kW – 536bhp of braking force – before you even consider the carbon-ceramic friction brakes. 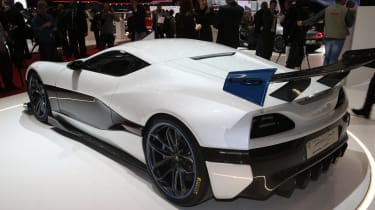 The car’s styling isn’t quite as groundbreaking as its claimed performance figures – and claimed they’ll remain until we see the car in action.

What the pictures don't convey is just how low and compact the Concept_S is in the metal – the windscreen in particular is as raked-back as any we've seen – and there’s plenty of technology under the car's skin too.

There’s a sizeable front splitter that also channels downforce-producing air through seven separate cooling systems, eventually feeding it out ahead of the windscreen.

Side skirts increase downforce further (and do their own bit to force air through three more radiators), while a rear diffuser sucks the car closer to the road. The eagle-eyed will also have spotted a chunky rear wing. The combined effects of all these aero features contribute 34 per cent more downforce than the Concept_One.

Inside there’s a similarly motorsport-inspired feel – and given Rimac has experience at the Pikes Peak International Hill Climb, the motorsport claims aren’t merely marketing fluff. Rimac has binned some of the Concept_One’s sound insulation and materials like Alcantara and carbonfibre feature heavily. Not quite as beautiful as the Chiron’s cabin perhaps, but appealing in its own way.

We’ll keep you up to date with the Concept_S – and Geneva’s other hypercars – right here on evo.co.uk. Head to our show hub page for the latest news and new cars.