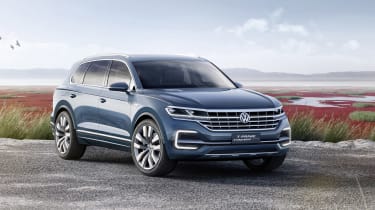 Volkswagen seems to have previewed a slew of new SUV models recently, which isn’t the behaviour you’d expect from a company still embroiled in an emissions-cheating scandal.

Of course, all those vehicles – including the T-Prime Concept GTE launched at Auto China 2016 in Beijing – have been environmentally-friendly plug-in hybrid models, like the road-going Golf and Passat GTE.

Smoke and mirrors perhaps, but like its predecessors and those two road cars, plug-in hybrid power allows the T-Prime Concept to punch above its weight.

A 2-litre TSI petrol four-cylinder sits at the heart of the system, producing 248bhp and 273lb ft of torque. An electric motor squeezed into the housing of the 8-speed automatic transmission provides 134bhp on its own and nearly as much torque at 258lb ft.

Combined, the two power sources develop 375bhp and up to 516lb ft of system torque in full kickdown mode, all sent through a 4Motion all-wheel drive setup.

In performance terms, and utilising the GTE mode that supplies full power from both the petrol engine and its electric sidekick, the result is a 6-second 0-62mph time and 139mph top speed.

As for economy, aided by the efforts of  a 14.1kWh battery pack and resulting 31-mile electric range, the headline figure is 104.6mpg.

That’s if the battery is full anyway (the work of a 2h30m charge at a 7.2kW public charging point), and the car is run on the NEDC economy test. In an unusual display of clarity, VW also lists the car’s economy should you flatten the battery: a less impressive-sounding 35.3mpg. 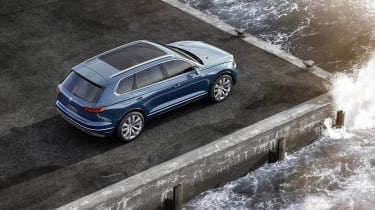 As ever, the power mix can be accessed in varying quantities by selecting one of the three drive modes: E-Mode (electric power only, but allowing the engine to kick in with a suitable prod on the throttle), Hybrid (self-explanatory) and the performance-orientated GTE mode.

Like other recent VW concepts though, much of the T-Prime’s appeal is within its cabin, which the company describes as a ‘mobile living space’, and like that of a ‘connected, progressive, personal residential environment’.

Sounds daft, but BMW’s similar ethos in the i3 resulted in a hugely pleasant driving environment, so we’ll hold the snark for now.

Much of the interior’s functions are accessed through touch-sensitive surfaces (such as those on the steering wheel spokes) or gesture and voice control. The main instrument panel is a 12-inch digital display and the main infotainment panel is 15-inches across and features an app-based format. Some of the display’s functions can be swiped across to the main instrument display.

Keep up to date with other launches in China on our show hub page.