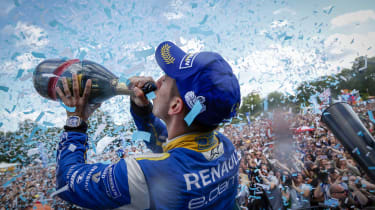 There was more than a hint of Prost versus Senna about the final round of the 2015/16 Formula E championship – and it had nothing to do with series competitors Nico Prost or Bruno Senna.

Instead, it was Lucas di Grassi, piling into the back of title rival Sebastien Buemi at turn two in the final race of the season, that had more than a hint of those classic 1980s and 1990s rivalries about it.

While both drivers wrote off the move as a racing incident, it could have had significant impact on the title standings, with each driver starting the race equal on points and di Grassi leading on count-back. Had both retired, the title would have gone di Grassi’s way.

In the end, neither driver finished in a points-paying position – but by taking the fastest lap of the race, Buemi managed to clear his rival by a mere two points to lift the title.

Buemi was diplomatic after the race. ‘The most important thing is that we won both championships,’ he said.

‘I’m actually sad you know, to win it in that way, but also to see what Lucas did because I was very respectful of his driving, he’s been amazing. Like he’s said many times, his car is very bad and he is a very good driver, and if he was in my car he’d be at least half a second quicker!’ 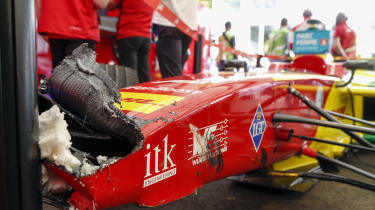 It was clear from the start of the weekend that Buemi was in with a strong chance, his Renault e.Dams car clearly quicker than the Abt Schaeffler car of di Grassi and his teammate, Daniel Abt.

That was borne out by the other e.Dams racer, Nicolas Prost, taking victory in both London rounds. It was enough to seal a third-place finish in the final standings between di Grassi and the DS Virgin Racing entry of Sam Bird.

It was a fitting finale for the 42,000 spectators attending the Battersea Park event, with no London round penciled in for the 2016/17 season. 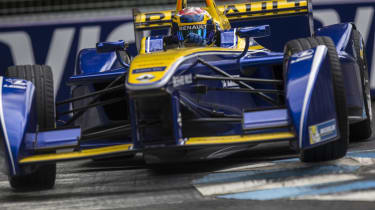 Not least the simple joys of ambling through London on a warm summer’s morn to a leafy location - rather than driving to a windswept ex-airfield - enjoying a cold beverage or two knowing you won’t be driving later, and stumbling back across London in the evening to your waiting train.

And the racing, of course, and if you cast aside any preconceptions and open your mind then Formula E is genuinely a spectacle worth watching. The competition is intense, with that wheel-to-wheel aspect we all crave from F1 that it rarely delivers.

There's real talent in the field too. The racers themselves are far more visible in the cockpit than they are in F1, so you see them working at the wheel and correcting the inevitable slides that stem from bumpy, kerb-lined city courses.

The noise? That's still an aquired taste, and I suspect the reason many petrolheads won't even given Formula E a chance.

But if you love racing - close, competitive racing on challenging circuits - then Formula E absolutely delivers.