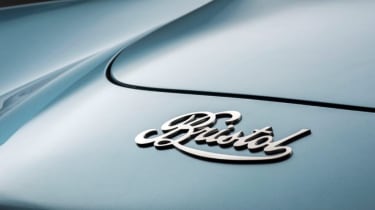 British sports and luxury car firm Bristol – best known in recent times for the short-lived V10-engined Fighter – has released the latest teaser image of a new sports car set to be unveiled on July 26.

Known as the Bristol Bullet, the car last made an appearance as a concept at the Goodwood Festival of Speed in striking camouflage, but will be unveiled undisguised later this month.

First announced at the 2014 Hampton Court Palace Concours d’Elegance as Project Pinnacle, the company recently announced the official Bullet name. Perhaps not coincidentally, it shares its name with a Bristol biplane used in air races in the 1920s.

The car will be a celebration of the automotive firm’s 70th year, and is described by the company as ‘a reference to Bristol Cars’ rich and exciting heritage’.

That heritage is clear in the styling. There’s a distinct retro vibe to the Bullet’s appearance, with strong nods to models like the 404 and 405 of the 1950s, which also featured the Bullet’s small, snout-like grille flanked by round headlights. 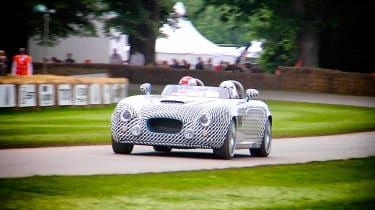 It’s certainly very different from the Bristol Fighter, a closed-cockpit sports car which ran between 2004 and 2011.

The Bullet will adopt the up-to-date construction of historic Bristol models too, albeit swapping aluminium construction for in-vogue carbonfibre.

And while those similarly-styled early Bristols used inline-six cylinder engines, the Bullet is set to utilise a naturally-aspirated V8 – a 4.8-litre BMW unit, expected to develop around 400bhp.

Production is expected to start in 2017 and there could even be a plug-in hybrid model on the way. More will be revealed on July 26.