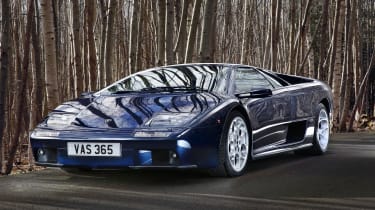 This year's Salon Privé will play host to the Pirelli Prestige & Performance Competition for the second time. On display will be the greatest supercars of the last four decades. The lineup includes legendary models from over 25 manufacturers showcasing the very best past poster-pinups.

Aston, Ferrari and McLaren are just a few of the obligatory attendees who’ll be competing across eight judged classes, two of which are dedicated to the Porsche 911 Turbo and Lamborghini Diablo, including a first-off the production line SVR edition.

There will be no shortage of racing icons on view either. Two Pininfarina-designed Lancia 037s will feature alongside their old nemesis: the Audi Sport Quattro S1 E2 steered to the WRC drivers title by Hannu Mikkola in 1983. Another noteworthy highlight of ‘Best of Group B Rally’ is a bonkers MG Metro 6R4.

We drove a 6R4 not long ago, and it upheld the widely regarded unhinged nature of Group B Rallying. ‘It’s so loud that once you’re moving, conversation is not just difficult, but impossible,’ said Henry Catchpole at the time.

One can only imagine the trouble faced by co-drivers having to make themselves heard, all while hurtling alongside mountain pass with a cavernous drop to their left. ‘This is a car designed purely with competition in mind and sanitised it is not,’ Henry said, adding ‘the distinctive bark is absolutely glorious and the thin piece of Perspex between our backs and the engine is about as much use as a  chocolate exhaust. It’s a potentially magnificent way to go deaf.’

> More: Henry Catchpole examines the details of the McLaren F1

The Rival Supercars class will show the sublime and ridiculous machines the 80s and 90s had to offer. This was a landmark era for supercar performance seeing some go over and above 200 mph for the first time. A Mclaren F1, Jaguar XJ220 and Aston Martin V8 Vantage make up the British contingent of these modern classics.

‘The countdown to Salon Privé has begun. We’re delighted to have brought together, with the help of the Salon Privé team, 80 of the most famous and significant supercars ever made and Pirelli is proud to welcome everyone on September 3rd.’

Other classes the 80 proudly owned supercars will be vying for top spot in include “To the Track & and Back,” “Wind in you Hair,” “Speed & Style” and “How Fast is Fast Enough”, among others.

The Pirelli Prestige and Supercar Lineup takes place on September 3rd at Blenheim Palace as part of the Salon Privé Concours D'elegance.