Nods to extensive Ferrari heritage in limited run of cars 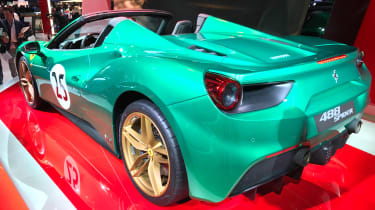 In the build-up to 70th anniversary celebrations planned for 2017, Ferrari has presented five distinct liveries at the Paris motor show. Collectively they pay tribute some of the greatest cars the Italian marque has ever built, and will be a rare sight on public roads.

Devised by Ferrari’s new ‘Tailor Made’ special commissions workshop, the liveries – all but one inspired by racing cars – will be limited to 350 cars, with each car also featuring a chrome ‘70 1947-2017’ plaque to mark the occasion. 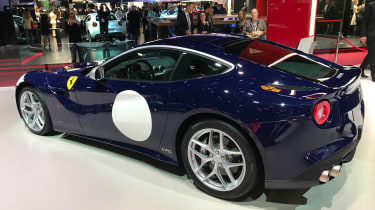 The cars include an F12 Berlinetta mocked up to look like the 250 GT SWB Stirling Moss drove to three victories, a tribute to Steve McQueen’s 250 GT Lusso in the form of a very unusual California T, and further homages to two fabled purebred racing cars.

Let’s start with the V12. Opinions will differ, but for evo the F12 in Blue Scuro is probably the pick of the bunch, and it has an interesting story, too. In the late-’50s, Ferrari wanted Moss on its books so badly it agreed to paint his 250 GT SWB racecar blue, and the Englishman duly delivered. During the Tourist Trophy at Goodwood in 1960, he even tuned into the race commentary on the car’s radio, saying it was useful knowing the gap to the chasing Aston Martin DB4 GTs. Moss won, of course, and this tribute, with its white racing band across its bow, looks good enough to eat.

The brown California T, meanwhile, is in homage to Steve McQueen’s similarly hued 1963 250 GT Lusso, which was bought for his 34th birthday by his wife, Neile. That car went on to compete in the Mille Miglia and with McQueen’s name in the history file must now be worth telephone numbers, as the classic car auctioneers say. The mash-up of muddy-brown paint and glistening chrome doesn’t sound too appetising, but in the metal, it was, and remains to this day, a stunning combination on the Lusso. Surprisingly, it suits the California T quite well, too. 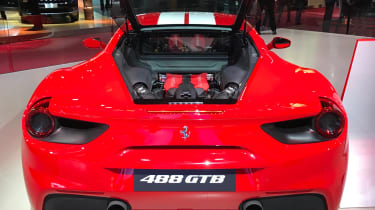 By far the most eye-catching car on the Ferrari stand in Paris is a 488 Spider dubbed ‘The Green Jewel’. Look past the mesmeric emerald paint and the gold wheels and you’ll notice the red driver’s seat. That’s a nod to the 365 P2, which won the 1965 Nine Hours of Kyalami, in South Africa, thanks in part to a stint from none other than a 25-year-old Richard Attwood. Attwood, of course, went on to take Porsche’s first victory at Le Mans, at the wheel of a 917K.

A tin-topped 488 GTB called ‘The Schumacher’ has also made an appearance and takes its styling cues from the seven-time F1 world champion’s 2003 racecar, the V10-engined Ferrari F2203-GA. We can’t remember Schuey’s steering wheel ever having bright yellow gearshift paddles, however…

Ferrari’s open-air version of the LaFerrari hypercar has also been roped into the 70th anniversary celebrations, and you can read all about that here.

There’s been no mention of the premium attached to these spectacular liveries, but we’d expect the £10,695 cost of the Mercedes-AMG GT’s ‘AMG solarbeam’ paintjob to seem a bargain in comparison. And that’s if you can get one in the first place.