No roof to silence the V10 and the purity of only rear-wheel drive, could this be the best way to enjoy the Huracan? 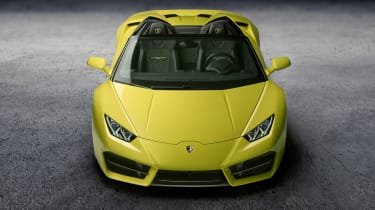 Lamborghini has shown its new rear-wheel drive Huracan Spyder at the Los Angeles motor show. The new car will be available to buy in January 2017 and, as with the Huracan coupe models, the two-wheel drive Spyder will be cheaper than the all-wheel drive version.

The new Spyder is based on our current favourite Huracan, the LP580-2 coupe. As well as sharing the same rear-wheel drive chassis the Spyder utilises the same naturally aspirated 5.2-litre V10 that produces 572bhp and 397lb ft of torque. Drive is sent to the rear wheels through the same seven-speed, double clutch transmission with column mounted paddles.

The chassis is fundamentally the same too. That means double wishbone suspension all round and optional magnetorheological dampers. Lamborghini says the new Spyder has been ‘optimised for two-wheel drive’, and the chassis control system, Lamborghini Piattaforma Inerziale (LPI), works with steering, stability systems and adaptive dampers (if specified) to emphasise the car’s rear wheel drive characteristics. 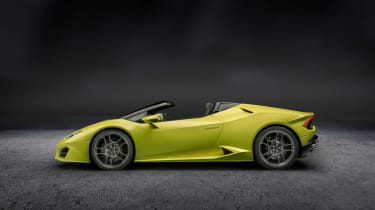 Each driving mode changes the Spyder’s balance too. The ANIMA (Adaptive Network Intelligent Management) button found on the steering wheel allows you to choose between Strada, Sport and Corsa driving modes. The latter is ‘tuned to provide over-steering characteristics’. However, as we’ve found in the coupe, the rear-wheel drive Huracan has more understeer in the initial phase of a corner than the all-wheel drive cars. This is easily neutralised in the rear-drive coupe though, and is still a fun and engaging car to drive. We expect the Spyder to behave in a similar manner.

Sadly the Sypder weighs 120kg more than the coupe at 1509kg (dry), 60 per cent of the weight is rear of the car’s centre point. This additional weight does blunt the effect of the engine slightly as it completes the 0-62mph dash in 3.6sec, 0.2sec slower than the coupe. However, top speed is only 1mph slower than rear-drive coupe at 198mph.

To distinguish the new rear-wheel drive Spyder from the four-wheel drive model, it has a different front and rear bumper. However, the differences are subtle. Just like the all-wheel drive Spyder, the fabric roof will open and close in just 17sec at speeds up to 30mph. The rear window can be lowered too, allowing you to revel in the V10’s scintillating noise even with the roof up.