Ferrari 488 Challenge revealed ahead of 2017 season 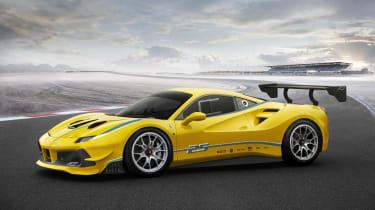 In 2017 the Ferrari Challenge will celebrate its 25th anniversary - and it does so with a brand new race car in the form of the new Ferrari 488 Challenge.

Revealed at the Ferrari World Finals event in Daytona, the 488 Challenge replaces the outgoing 458 Challenge EVO and asserts its suitability by lapping Ferrari's Fiorano circuit a second quicker.

At 1m15.5s, it's more than four seconds faster than the firm's quickest-ever road car, the LaFerrari, and only half a second behind the mighty Ferrari 599XX Evoluzione.

For an indication of how far the Challenge series has come in quarter of a century, that time is also a full 17.5 seconds quicker than the Ferrari 348 Challenge that racers campaigned in that very first season.

The source of that speed is the same 3.9-litre turbocharged V8 you'll find in the 488 GTB road car, albeit tuned beyond the standard model's 661bhp. There's new engine mapping and the seven-speed dual-clutch transmission gets shorter ratios - Ferrari says it can now hit maximum revs in fourth gear just six seconds after setting off. 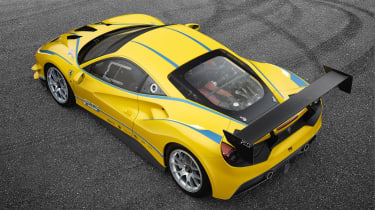 Engineers have also managed to shed weight from the powertrain, while the remarkable Side Slip Control system that so effectively manages all that power in the road car makes its first appearance on a Challenge racer. Along with the E-diff, it's been recalibrated for racing purposes, while a pair of manettino switches on the steering wheel let drivers tailor both when and to what degree the traction control system cuts in. Yet another manettino adjusts the system's behaviour under braking.

The road car's body has also been altered significantly for its new racing role. You'll struggle not to notice the enormous rear wing, whose profile is similar to that of the WEC class-winning Ferrari 488 GTE, with a quoted aerodynamic efficiency improvement of 9 per cent over the 458.

A new front bumper also contributes a 7 per cent aerodynamic improvement next to the 458 Challenge EVO, while behind it the radiators have been inclined towards the rear of the car to both reduce drag and improve airflow during racing conditions. A series of air intake changes benefit engine and brake cooling, while the engine air intakes have been positioned in a high-pressure zone under the rear spoiler.

> Read our full review of the road-going Ferrari 488 GTB