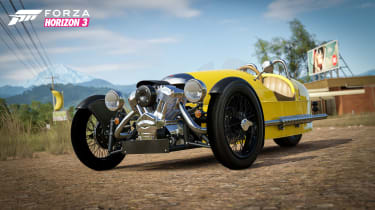 That said, there's still plenty of realism present in Forza Horizon 3 and much of that is in the selection of cars available. That selection has extended further with the new Logitech G car pack, available now as part of the £23.99 Car Pass on the XBox Store.

As we've come to expect, there's plenty of variety here. It's hard not to imagine that the most entertaining inclusion will be the 2014 Morgan 3 Wheeler, with its 2-litre V-twin thumping away up front and its 1930s-throwback styling. Whether it will cope well with Horizon 3's unique environment - which takes in a swathe of the Australian Outback - remains to be seen. The game's extensive options mean you can probably turn it into a Mad Max-style rally car...

Another potential favourite will be the 2017 Mercedes-AMG GT R. We're yet to drive the most extreme AMG GT in the real world but gamers will get a chance in the new car pack - and of course, it's available in the familiar bright green paint scheme in which it made its debut. 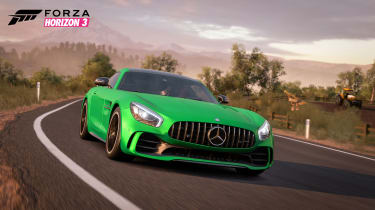 A pair of more refined Brits join the new Morgan, including 2015's Bentley EXP 10 Speed 6 concept (with its gorgeous scaled-down Continental GT styling) and the 2017 Jaguar F-Pace S. If the Jaguar proves as popular online as it seems to be in the real world, expect plenty of them in online races.

The 1965 Pontiac GTO is also included - a car claimed by some to have started the muscle car craze in the US throughout the 1960s and 1970s. Fans of Australian market cars will welcome the inclusion of the 1996 HSV GTS-R, the most extreme Commodore model of the time with a 288bhp, 5.7-litre V8 under the bonnet.

And rounding out the choices is a Japanese modern classic, in the form of a 1992 Toyota Supra 2.0 GT Twin Turbo. Again, it's sure to have plenty of tuning options in-game - and someone must surely have created a Fast and the Furious livery by now...

You can see some of the cars in action in the video at the top of the page.