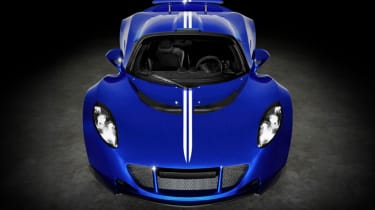 Hennessey has announced it has ended production of its 270mph supercar, the Venom GT. The Texas company has celebrated its record breaking car and created a special version of the very last Venom GT.

Called the Final Edition, the last car is based on the hard-top Venom and is finished in bright blue with two white stripes that stretch down the centre. The car is powered by Hennessey’s most powerful engine, a twin turbocharged 7-litre V8 that produces 1451bhp. The Final Edition is the thirteenth Venom that Hennessey has ever built; the production run consisted of six hard-tops, six roadsters and one prototype.

Despite being priced at $1.2million (£976,006) the Final Edition has already been sold. Don’t worry though, if you want to get your hands on a Hennessey Venom GT the first one to be built – originally commissioned for Aerosmith's lead singer Steven Tyler – is going up for auction today. All of the proceeds from the sale will be go to Tyler’s charity, Janine’s Fund.

The Venom GT set the Guinness World Record for the fastest car to accelerate from 0-300kph (186mph), achieving the speed in just 13.61 seconds. It then managed to reach a top speed of 270.4mph at NASA’s Kennedy Space Centre in February 2014.

The Venom idea started after John Hennessey joked he could put one of his modified Viper V10s into an Lotus Exige. After his design team sketched what the final car might look like Hennessey was hooked and started the project proper. The V10 was ditched for a lighter and smaller Chevrolet V8 with two turbochargers. Then UK outfit Delta Motorsport helped Hennessey engineer a new front and rear structure for an Exige as well as new suspension and brakes so it could handle the extra performance. Bespoke carbonfibre bodywork was then designed to cover the longer wheelbase and further improve the car's aerodynamics.

When the Venom GT was originally launched its turbocharged V8 produced 1000bhp, however power grew to 1451bhp shortly after. The larger power meant that the 1244kg Venom GT was the first supercar to exceed a power-to-weight ratio of one to one.

In 2013 Richard Meaden, evo’s contributing editor, went over to Texas to drive the Venom both on the road and witness its attempts to brake multiple world records. Watch the videos below.