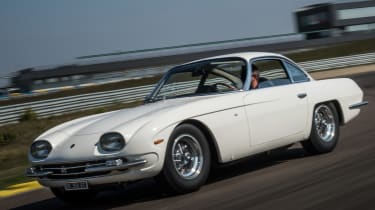 Lamborghini's in-house restoration team, Lamborghini PoloStorico will be showing off its first restored 350 GT at this year's Retromobile 2017 classic car exhibition. PoloStorico’s fourth project after a Miura, LM002 and Countach, the 350 GT chassis number 0121 was one of the first fifteen Automobili Lamborghini’s produced back in 1964.

The restoration of the bodywork and interior took an incredible 1,150 hours to complete, with an additional 780 hours spent to check over the mechanical and electrical functions. Lamborghini PoloStorico has strived to maintain absolute originality, conserving any viable original parts where possible, including the wooden steering wheel, original pedals and even the period stereo.

> Check out our drive of the new Lamborghini Aventador S

Lamborghini says that particular attention was paid to reworking the engine cooling, braking systems and fuel systems to improve safety without compromising on originality. Not stopping at a mechanical restoration, the team at PoloStorico repainted the body with the same techniques and formula as the 1964 original, accentuating the sleek Carrozzeria Touring lines.

Powered by a 270 bhp 3.5-litre V12 engine, the 350 GT was company founder Ferruccio Lamborghini’s first production model. Launched at the 1964 Geneva Motor Show in production form, it was just as much born out of a personal vendetta against a certain Enzo Ferrari as it was a commercial enterprise.

The Lamborghini PoloStorico restored 350 GT will be on display at Retromobile 2017 from 8 – 12 February in Paris.