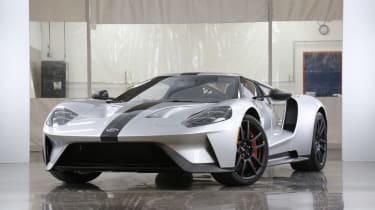 The all-new Ford GT may not have reached customers yet, but it has not stopped Ford from offering a new stripped out Competition Series to give the 638bhp American supercar some extra bite. The car was shown off in the metal at Daytona Raceway, where Raj Nair, Ford’s executive vice president said: ‘the Competition Series was developed with the most hardcore track enthusiasts in mind, providing a tailored set of lightweight features and unique livery to match.’

To fit the road racer brief, Competition Series changes include a Perspex rear engine cover, the removal of air-conditioning, stereo and interior storage compartments as well as further use of lightweight Gorilla glass in the bulkhead window. This is also used on the windscreen, as in the standard car and an industry first. 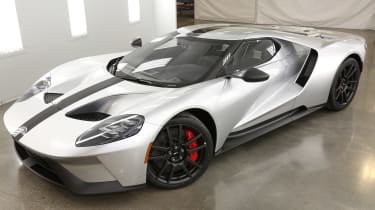 In addition to this, the Australian-made carbonfibre wheels and titanium exhaust system that appear on the options list of the basic car are standard fit for the Competition Series.

To help distinguish the car aesthetically, Ford has gone to town with exposed carbonfibre, laying it bare on the wing mirrors, a-pillars and on a small central stripe. Inside is similarly decked out, and Ford has covered most surfaces with Alcantara and exposing yet more carbonfibre around the centre console and door sills. 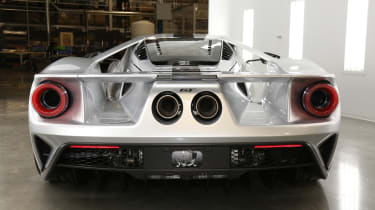 Ford has only confirmed the Competition Series for the American market at this stage, with its first public outing scheduled for this weekend’s Daytona 500 where it will headline a large Ford display. No word has been given as to pricing, but we suspect that if you’re in the market for a GT it’s unlikely to matter.