Normal, Sport, and Track modes will be joined by Wet mode and V-Max for ultimate speed 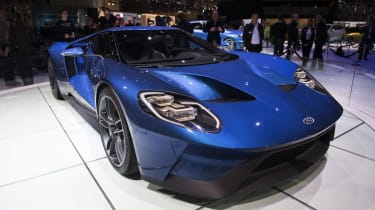 Ford has announced that the new GT will provide five separate modes for driving, to help owners get the most out of their new 647bhp supercar. Production of the car has already begun, and initial orders have been taken – but Ford continues to drip-feed information about the upcoming car to keep us on our toes.

The first of the driving modes is Normal. As the name might suggest, this is for ‘everyday’ driving, with the ground clearance raised to 120mm for easier navigation of bumpy town roads. In this mode the rear wing deploys automatically at 90mph for aero assistance. 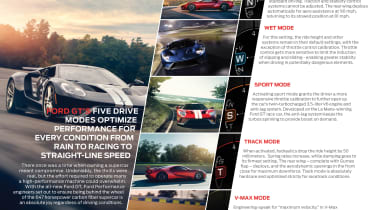 Wet mode sharpens the throttle response for greater adjustability should the car begin to slide. Sport mode sharpens it even further, as well as spooling up the turbos and keeping them spinning – an anti-lag system first developed on the Le Mans-winning Ford GT racer.

In track mode, the car drops its ride height by 50mm, firms up the dampers, deploys the rear wing, and closes up the aero flaps in the front. Ford describes track mode as ‘absolutely hardcore.’

The next mode is the oddly-named V-Max. No, it’s not a new people carrier to sit above the S-Max – Ford says it’s ‘engineering-speak for ‘maximum velocity.’’ Silly name aside, V-Max mode stows away all aero elements and endows the car with its maximum 216mph top speed – making the GT the fastest road car Ford has ever built.

> Click here for details on the Ford GT Competition Series

Find out what else we know about the Ford GT below. 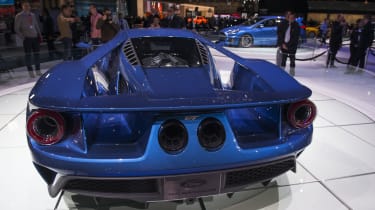 The twin turbocharged 3.5-litre V6 in the GT is part of Ford’s EcoBoost family of engines. It puts out 647bhp and 550lb ft of torque, making it by far the most potent EcoBoost production engine to date.

The engine is based on the same 'race-proven' architecture found in Ford's IMSA Daytona Prototype cars and the GT racecars, where it was responsible for three race wins in its first IMSA Tudor United Sportscar Championship season (in 2014).

The new unit represents a drastic change compared to the previous GT, which was powered by a supercharged 5.4-litre V8 producing 550bhp and 500lb ft of torque. Though some had labelled it as almost blasphemous to suggest the next GT will utilise anything less than eight-cylinders, the new car's shift to a smaller capacity, forced induction unit was almost inevitable given increasing global pressure to lower emissions. How successful that has been is open to debate: the GT's recently-announced EPA fuel efficiency ratings suggest it's even less frugal than its V8 predecessor... 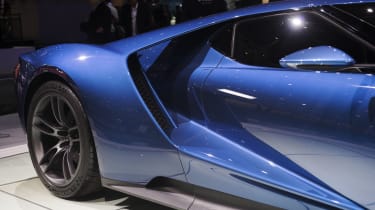 A race version of the Ford GT has already been competing in endurance events for a year now and this track development has benefitted the road car, too. Not only has the road going GT set an incredible top speed, but at a recent test at Calabogie Motorsports Park in Canada it set a lap time of 2:09.8, 1.08sec faster than the McLaren 675LT.

Taking into account Ford’s recent investment in aluminium chassis development and its extensive use in the old car, it's unsurprising to learn that the new GT will utilise lightweight aluminium subframes. The main structure will be made from a carbonfibre though, which will not only reduces weight but also contribute to an impressive structural rigidity. To improve the car's stiffness even further and improve safety, the GT has an integrated steel roll cage.

The body will also be constructed of carbonfibre and will feature active-aero to enhance braking and downforce, whilst also being able to reduce drag when necessary.

The liberal use of exotic materials has meant that the GT has a dry weight of less than 1400kg, and combined with the engine’s 647bhp out put the GT has a power-to-weight of 470bhp/ton.

Given that the previous GT featured one of the most composed and communicative chassis in its class (enough to land it the title of evo’s Car of the year in 2005), the new, lighter car has a lot to live up to. Since this’ll be Ford’s 'halo' car, we can assume Ford won’t be cutting corners. 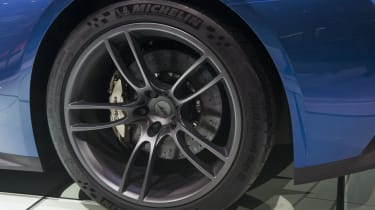 To complement the GT’s dynamic aerodynamics it also has active suspension that changes the ride height to help alter the car’s downforce, drag and balance for any given situation.

The new Ford GT will be available with high-performance carbon ceramic brakes at all four corners. The front discs are 394mm in diameter and squeezed by six-piston Brembo calipers, the rear axle has a slightly smaller set up with 360mm disc and four-piston calipers.

The brakes sit behind 20-inch wheels that are then wrapped in Michelin Pilot Super Sport Cup 2 tyres, made using a unique compound and structure adapted specifically for the new GT.

The Ford GT doesn’t have conventional dials, instead speed and revs are displayed on the car's digital display. While far from the first performance car to use such a display, Ford says the technology will eventually filter down the Ford range to other models.

The screen reconfigures itself according to each of the five different driving modes, Normal, Wet, Sport, Track, and V-Max. The display changes the kind of information shown to be most appropriate for each mode - putting emphasis on the selected gear in Sport or Track, for instance, or putting speed front and centre in the V-Max setting.

Modes can be changed via a switch on the steering wheel, which also changes the characteristics of the engine, transmission and chassis. The screen measures ten inches and has been developed using feedback from former Le Mans participant and 2000 class winner, Scott Maxwell.

The GT has an ‘F1-style’ steering wheel with a stalkless steering column. The seats are fixed in place, and the steering column and pedal box adjust to suit the driver instead. This ensures the car’s weight distribution is consistent, irrespective of the driver’s size.

The 500 lucky people who have been chosen to buy the new Ford GT have started to receive an order kit for their car. The package is designed to help the limited customers choose the ideal specification for their car.

The kit comes in a case made from the same carbonfibre the GT will be made from. It’s also secured by the same clasp that holds the rear clamshell of the GT race car closed.

Inside is a selection of swatches help the future owners select their car’s colour scheme. Eight GT shaped molds are finished in each paint choice and various different coloured bands can be placed over them to simulate the GT's iconic double stripes. Each of the six wheel colours are displayed on miniature versions of the rims and are backed by brake calipers in contrasting hues. 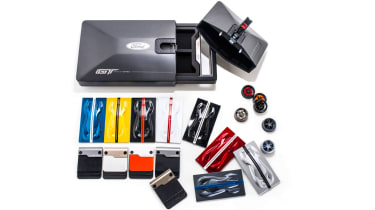 Ford is set to make 250 GTs every single year, each of which has been confirmed to cost what they say will be 'Aventador prices'.  Right now a Lamborghini Aventador costs £260,000 from new. The car is set for release this year.

The Ford GT has already been competing in endurance racing for a year now. It’s debut at the Daytona 24 Hours wasn’t spectacular, with both cars entered suffering transmission issue. However, the season improved significantly and the GT won its class at Le Mans 50 years after the Ford GT40 won the race outright.

To learn more about the new Ford GT watch the videos below.