Art cars take inspiration from Memphis art movement of the 1980's, with crazy patterns inside and out 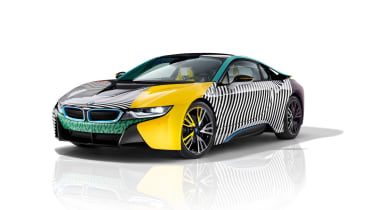 BMW's cars have been the subject of many art installations over the years, and the brand is proud of its collection of iconic art cars. The latest pair, however, produced by design company Garage Italia Customs, could be some of the maddest yet.

The cars in question are both BMW i models - an i3 and an i8 - and under Garage Italia Custom's care they've undergone quite the transformation from classy electric vehicle to madcap multicoloured art installation. The commission takes inspiration from the Memphis art period of the 1980's, and the cars are named the i3 and i8 MemphisStyle.

>Click here for our drive of the BMW i8 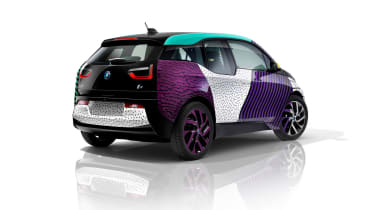 Under the watchful eye of Garage Italia Custom’s chairman and creative director Lapo Elkann, both the i3 and i8 show cars undertook a five-week design and painting process, including a period of collaboration with Michele De Lucchi, a founding member of the Memphis art movement.

Both cars are covered in various crazy patterns - a hallmark of Memphis art. Bold spots and stripes cover the bodywork, and there's even a few sections of an unmistakeable watermelon print. The blocks of colour are supposedly aligned to match up with the car's bodywork. It's all a part of Memphis art's provocative style, which evoques movements like Art Deco and Pop Art.

The interior has been given a similar treatment, with the colours and patterns seen on the plastic bodywork repeating themselves in leather and Alcantara. Designed to be an expression of what Garage Italia Customs can achieve for its customers, the MemphisStyle special editions are the most outrageous commissions yet. 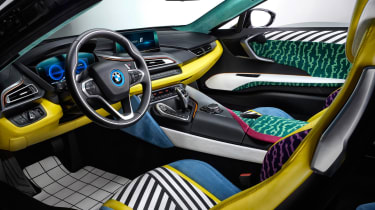 After premiering at the Milan Furniture fair, the i8 MemphisStyle will also be exhibited at Frieze New York, an art fair held in Manhattan in the beginning of May this year.