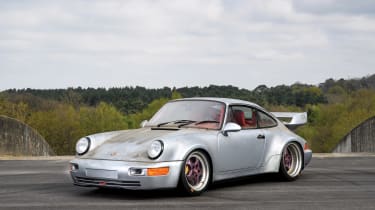 If there’s a car that’s likely to add fuel to the Porsche fan’s fire it’s this: a 1993 Porsche Carrera RSR 3.8 with only ten kilometres on the clock. Better yet, it’s heading to auction at the RM Sotheby’s, Villa Erba sale this May.

Based on the 911 964 generation this end of model life car was one of only fifty-one examples built. The RSR 3.8 was conceived in a similar vein to a current, and much idolised, Porsche offering - the GT3 RS. However it was arguably a much rawer conception even than the modern day track weapon. 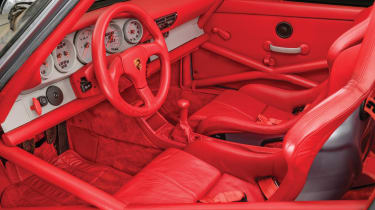 The RSR’s intended track domain didn’t deter the buyer of this version from specifying the opulent CanCan red leather that covers almost all the tactile surfaces in the cabin and is accompanied by matching carpets. The bold colour scheme inside might even explain why the mileage on this example is so incredibly low.

> Browse other classic cars for sale at classicandperformancecar.com

Augmenting the special order interior are the tri-piece, Amethyst Metallic wheels, which are offset by the Polar Silver paint finish, still protected by the cosmoline coating applied at the factory.

Sitting within the turbo-bodied RSR is a race-bred, dry-sumped 3.8-litre engine which sends power to the rear via a five-speed gearbox. Porsche’s quoted power and torque figures were typically conservative at 345bhp and 284ft lb respectively. Period reviewers proclaimed power was closer to 370bhp and the car is capable of a 3.7 second 0-60mph time. 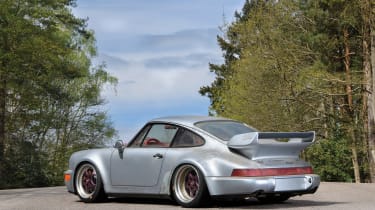 The road going racer has some serious track credentials. Having picked up impressive results, taking the spoils in endurance races at Spa, Suzuka and Interlagos, the RSR is a real thoroughbred.

With only ten kilometres on this delivery mileage example, and taking into account the burgeoning values of Porsches in today’s market, it’s anyone's guess how the RSR will perform when it crosses the auction block at RM Sotheby’s event at Villa Erba on May 27th.