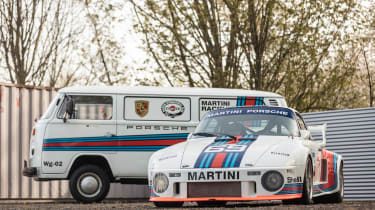 On the list of iconic racing liveries – Elf, JPS and Red Bull to name but a few – the Martini livery has to be up near the top. Though the colours later adorned Alfa Romeos, Lotuses and Lancias, their first outing was with Porsche, and it’s on a Porsche where they appear here.

This glorious 1976 Porsche 934/5 may not have worn the Martini colours originally, but it carries them now to great effect. It’s an FIA-spec Kremer Group 4 Competition Coupe which was entered into three races in 1977 before being put into storage. It was then resurrected nearly 30 years later, for use in vintage racing, and it’s now going under the hammer at the Bonhams Spa Classic auction. You’ll need deep pockets, though – it’s estimated to achieve an auction result of at least £270,000 before fees.

And what’s the perfect partner to a Martini-liveried Porsche? Why, it’s another rear-engined German – a Volkswagen T2 Transporter, also decked out in the Martini colours. Converted from its original spec to act as a vintage race support vehicle, it includes a sunroof, while the interior has been left bare to transport all kinds of racing paraphernalia. It even features a tow bar, while the engine has been upgraded from the asthmatic 47bhp unit to a much more palatable 110bhp, courtesy of a 2.1-litre engine from a Porsche 914. It’s estimated to reach at least £39,000 at auction. 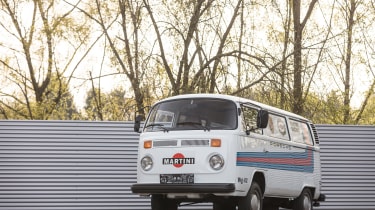 But there’s more than just these two vehicles going under the hammer. There’s plenty of appeal in Lot 63 – a 1978 Jeep CJ-5, with a beautifully presented body seemingly at odds with its extreme off-road nature. Having gone through an extensive restoration in the mid 2000’s, it was then ‘upgraded’ with a lift kit, exhaust and intake snorkels, a competition-series winch and enormous 33” ‘mud country’ tyres. It’s a V8 model – rare for Europe – and fitted with a three-speed manual transmission. Bonhams expects it to reach £17,000, though it’s sold with no reserve. 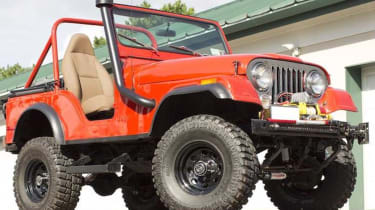 Or, if you’d rather waft than bounce, you could go for this 1921 Rolls-Royce Silver Ghost. A four-seat convertible Phaeton model, this Swedish native benefits from an older restoration and a massive 7-litre engine. It’s estimated at £86,000. 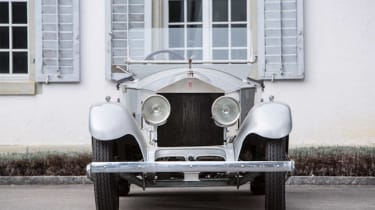 Moving swiftly on to a much more ‘evo’ offering, how about a 1988 Ford Sierra RS Cosworth? This LHD model has clearly been cosseted since it was delivered new in France, having covered less than 20,000 miles. Everything’s present, and the listing notes that the car ‘runs extremely well’. 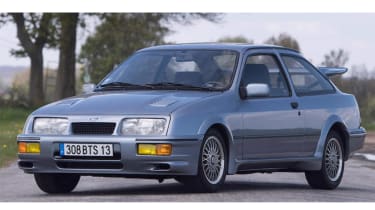 Or for something even rarer, there’s a 1989 BMW Z1 on offer – and it’s not just any Z1, but an Alpina Limited Edition Tribute. The Alpina additions add very little aesthetically – only 17” alloy wheels and an bespoke steering wheel, but under the hood a new engine saw a 30bhp power boost. It's one of just 66 examples built. 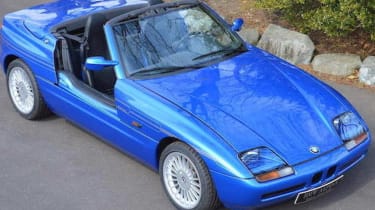 There’s plenty more track-biased machinery on offer, too. A 1986 BMW 325i Juma Group N Competition Coupe rubs shoulders with a 1989 Audi V8 Quattro Belga Procar Competition Saloon – both with plenty of racing history. Or if you want something a little faster, there’s even two bona fide Grand Prix cars going under the hammer.

The first is the 1991 3.5-litre Benetton-Cosworth Ford B191 – one of the first cars used by Michael Schumacher, and one of the last with a manual gearbox. It’s capable of producing 650bhp at an incredible 13,000rpm thanks to a naturally-aspirated V8 engine. It’s offered in running order, restored to its original specification and with two world champion drivers to its name – Schumacher and Nelson Piquet. It has an auction estimate of £640,000. 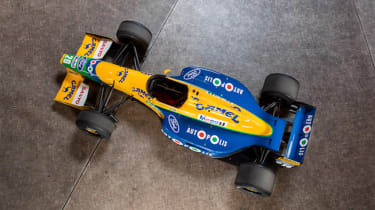 Finally, the auction offers up a real one-off. From a distance it could easily be an Alfa Romeo 8C Monza – one of the finest Grand Prix cars of all time – but look closer and you’ll notice the proportions are scaled down. This is a beautifully built, child-sized replica of the 8C Monza, and was handbuilt earlier this year to exacting standards. It features a single-cylinder, 6.5bhp engine under the hood, and could become an ideal collectors item for its estimated auction price of £2,600.